CRISPR in the history of science and intellectual property

Those of you with even a glancing interest in the biosciences will have noticed the flurry of high profile articles relating to the patenting of CRISPR-Cas9. Now that the USPTO has agreed to an interference proceeding, the range of such articles will continue to grow in variety and scope, drawing in the perspectives of lawyers, DIY-biologists, scientists, artists, economists and yes – your humble historians. If you want to know more about what CRISPR-Cas9 actually is, a good place to start is by watching this video of a seminar recently given by Engineering Life’s own Emma Frow.

In this post I want to suggest that our understanding of the CRISPR ‘controversy’, or ‘legal proceeding’, or ‘biotech showdown’, or ‘embarrassment’ (depending on how extraordinary you think this case actually is, or what you take it to exemplify) can be improved by a look at the history of science and intellectual property (IP). My motivation isn’t to ‘take a step back’ or to ‘pause for reflection’, but because – as those pursuing what has been called ‘The New Historiography of Science, Technology, and IP Law’ have demonstrated – it is through cases such as these that the standards of university/institutional conduct, the goals of public policy, our expectations of scientists, and what we think scientific research is for, all get debated and (for a time and place) decided.

The most obvious way to start is by showing that the CRISPR case is playing out – at the broadest level – in similar ways to how high profile science and technology IP disputes have played out in the past. For the historian this causes a sensation rather like when a doctor tests your reflexes by tapping your knee. Every time you read something new that reminds you of something that happened in the past, your mind goes ‘ooph, I’ve seen that’, then a few days pass and another article is published and, tap, ooph, there it goes again. These spasms don’t reveal anything in themselves, but can help us figure out what else might be going on, and what might be the most important questions to ask.

I felt a particularly strong spasm just last week, on reading an article in Cell written by Eric Lander: ‘The Heroes of CRISPR’. Both Lander’s astute and not so astute readers will have noticed the neon signage that arguably runs between its lines, pointing towards the importance of MIT in the application of CRISPR to mammalian cells. My historical muscle reflex was provoked by a case detailed in Graeme Gooday and Stathis Arapostathis’ Patently Contestable (2013) from the history of wireless telegraphy. After key patents were awarded to one Guglielmo Marconi at the end of the nineteenth century, a range of different histories of wireless telegraphy began to emerge, ones that more or less stressed the greater importance of other individual scientists, or the international collective. The ‘Arch-builders of Wireless Telegraphy’ as John Joseph Fahie called them in one of the earliest of these histories (1899), are brought together most evocatively in this visual representation from his book on the subject. Fahie’s intention, so Gooday and Arapostathis argue, was to decenter Marconi from this history, making his patent claims look less legitimate or at least less worthy. 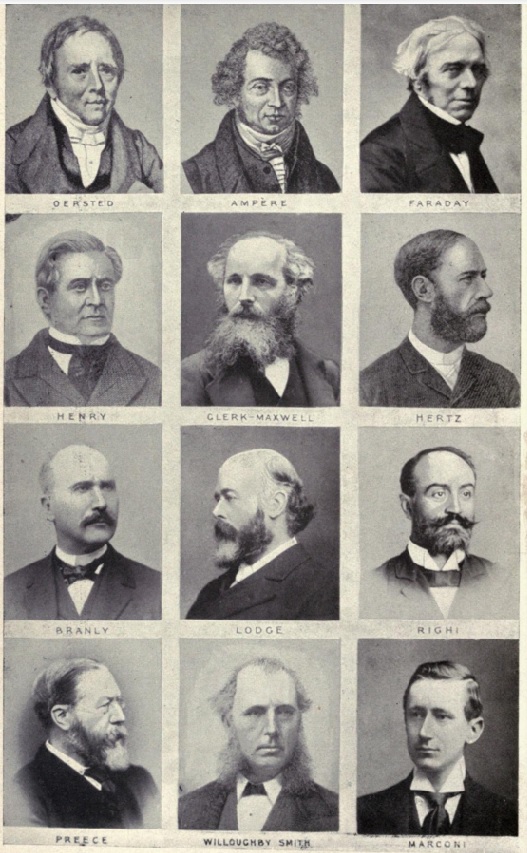 Frontispiece to – Fahie, A History of Wireless Telegraphy, 1838-1899, William Blackwood and Sons, London (1899). My thanks to Dr Elizabeth Bruton for helping me source this image.

There are clearly similarities and differences between the Lander case and that of Fahie.

In both, for instance, the way in which their histories are written ultimately suggests, or can be read as suggesting, that certain candidate inventors are more or less legitimate. Likewise, in both, visual representations of the collective endeavour are put to good effect, Lander with a map and hotspots, Fahie with a ‘map of portraits’ (these people also worked in many different countries, as in the CRISPR case). Both also implicitly advance a certain view of what inventorship might mean: either as the outcome of the work of dispersed brilliant individuals or as emerging from a collective. This point has already been made excellently in a Wired article on CRISPR from Sarah Zhang who (also drawing on scholarship in the history of science) aimed to broaden the story of CRISPR to include important contributors that might be ignored if one focusses on the Doudna and Feng Zhang patent dispute, as many other journalists seem intent on doing.

The differences between Lander and Fahie are also worth noting. Lander for instance is up there with the most powerful figures in the glamorous world of big budget bioscience, while Fahie (though well known) did not have such status in engineering. Moreover, the development of CRISPR has taken place inside universities and institutions that are in receipt of considerable public funding, while Marconi’s operation was private (though, as Elizabeth Bruton has demonstrated, the Marconi Co. relied a great deal on the expertise, facilities and research undertaken within the state funded Post Office and the Admiralty, and in its early years depended greatly on government contracts).

With such historical episodes in mind (and there are many many more to draw on) we can begin to see the most relevant questions. Rather than focussing on ‘who really did it first’, there are perhaps bigger issues at stake. For me, the following present themselves with regard to the CRISPR case:

Ultimately then, I’d like to see more reporting like Sarah Zhang’s in which the opportunity to discuss what intellectual property is, what is appropriate for people to own, and what kinds of industry gets established, are explicitly opened up for discussion by a wider range of people. Even if you don’t think you have views on all this yet, you might well have opinions about what scientists are for, what public funding is for, and how the history of a subject can be used by various actors to substantiate arguments about intellectual property.

Update: Professor Nathaniel Comfort, historian of science and medicine, has written an in-depth analysis of the Lander paper, highlighting very precisely the ways in which the latter might be doing a number of jobs of work, as well as considering the kind of historical writing that Lander might be thought to conform to.