Before starting the Engineering Life project, Pablo Schyfter and I were part of Synthetic Aesthetics, which brought together synthetic biologists, social scientists, and artists and designers to think about their work in new ways. The other members of the project team were the synthetic biologists Drew Endy and Alistair Elfick, and the critical designer Daisy Ginsberg.

The five of us were recently provoked into writing an open letter to the Synthetic Biology Leadership Council, published on the Synthetic Aesthetics website. In it we point to the misrepresentation of our project in the new Strategic Plan for UK synthetic biology Biodesign for the Bioeconomy, which presents Synthetic Aesthetics as aiming to ‘beautify’ or ‘better communicate’ the science.

Although this is likely to have been an unintentional error, it does reflect a broadly-held assumption that this is the role for art and design in art/science collaborations. It is much easier to gloss the work in this way than to see it as critiquing and challenging dominant ways of imagining the future, which was one of the main objectives of the Synthetic Aesthetics project.

In our letter we also draw attention to a broader point that emerged from the project about the inseparability of values from design. This is particularly pertinent since the Strategic Plan calls for a move towards ‘biodesign’, but seems to assume that the only value that underlies this is commercialisation. We wrote about these issues, and many others, in our motley, interdisciplinary and multi-authored book Synthetic Aesthetics.

The point I want to make here, however, is that the both book and the letter to the Leadership Council were the result of collaborative thinking across disciplinary divides. Neither of them are critical interventions from disgruntled social scientists or external observers of the technology. Drew Endy and Alistair Elfick are leading figures in the synthetic biology community, and Daisy Ginsberg comes from the playful and subversive tradition of critical design. But what we found through working together is that we all shared a desire to broaden and diversify debates around synthetic biology, and to interrogate notions of ‘better’ design.

I am optimistic that these aims are shared by other scientists, engineers, social scientists, humanities scholars, artists, designers and civil society groups, and that together we might be able to challenge the narrow way in which synthetic biology is currently being framed in reports such as Biodesign for the Bioeconomy. 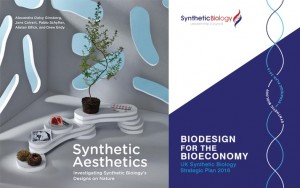