Creation, Care and Complicity: exploring synthetic biology with the Golem

This post is a continuation of thoughts prompted by the Shuffle Festival. Other scholars more systematically consider the role of fiction and legends in how societies understand and seek to influence science and technology. If, like me, you aren’t very familiar with this literature, maybe this blog post will serve as an inspiration to explore further (I, for one, have ordered delightfully promising library books…It’s a start). If you are trained in this area, by all means, please school me.

In my previous post, I argued that Jurassic Park – for all its awesomeness – is no longer operating as a useful narrative to open up conversation around areas of science and technology such as synthetic biology. Instead, it serves as a short-cut to certain standpoints in what are becoming well-worn debates on novelty, control, and trust. Anyone who has been part of public discussions on the life sciences will probably agree that the story of Frankenstein has come to play a similar role. So then, what stories can we use to orient our conversations as we consider emergent areas such as synthetic biology.

First, let’s step back and consider what we are asking of fiction. Science fiction is often asked to play an anticipatory role – what will be the next cutting edge science, and what will be its unintended impacts. In this mode, we ask sci-fi authors to crouch on the hood of The Steamroller of Science, casting their light onto the near future, alerting the driver to potholes, keeping us all on The Road to Progress. And bear in mind, this is a steamroller we are talking about; it’s gotta be a dang big pothole to require a route diversion. (The poor sci-fi author. A constant crick in the neck, a glaring headache from peering into the obscured landscape ahead. Is that a cliff’s edge? Will it mean an uptick in sales, or accusations of fear-mongering? Both?)

Instead, I’d rather think of storytelling as helping us envision the journeys we might go on, with different routes, each with its own potential perils and possibilities, leading to a multiplicity of destinations. Stories needn’t be about the current cutting edge to speak to contemporary concerns. Older stories remind us of past fears and dreams, of how our cultures previously navigated compromises and complicities along the way. Should we stick to that route? Have our desired destinations changed? 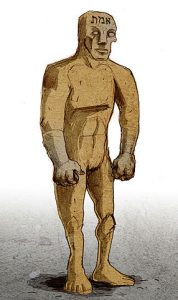 With this in mind, what stories can provide a substrate for enriching conversations around synthetic biology and its governance? Allow me to offer one: the enigmatic figure of the Golem. There are many tales of golems, mostly based in the traditions of Jewish mysticism. A holy man with a few helpers (also holy men) shape an image of a large man out of clay, and through the proper recitation of the proper words, imbue it with power, with energy, with something like a life force. Often this is done by placing the Hebrew word for truth on its forehead, or by placing a scroll under its tongue. The Golem is almost always mute, strong, more or less amoral. Often it is obedient, although this literal obedience sometimes causes trouble; sometimes its desires grow apart from those of its creator and this causes trouble; sometimes it does exactly what is asked of it and there is no trouble at all. The Golem’s creator can stop it, by erasing a letter from its forehead and changing the word to “death,” or by removing the scroll. In some tales, the rabbi is crushed by the collapsing Golem’s body, other times it is no big deal.

Now, you may well be thinking: dude, 20 years late. Okay, yes, Harry Collins and Trevor Pinch used the Golem to describe science and technology in their very popular series on understanding controversy and contestation. They chose this figure in order to strip science of enchantment, rooting it firmly as a human endeavour: “Golem Science is not to be blamed for its mistakes; they are our mistakes. A golem cannot be blamed if it is doing its best. But we must not expect too much. A golem, powerful though it is, is the creature of our art and our craft.” 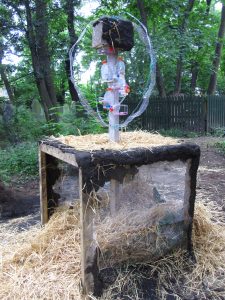 But Collins & Pinch’s Golem series doesn’t actively engage much with this central metaphor. So, if you’ll allow me, I will follow the lead of others and apply this figure to synthetic biology, and see where it might take us. There are a number of seemingly neat parallels between the figure of the Golem and the figure of synthetic biology as it is coming into being:

– A Vision of Control – At the Shuffle festival “Golem” installation, bioartists Oron Catts and Ionat Zurr talked about the Golem as a figure that can be stopped if the creator so chooses, speaking against the popular narrative of inexorable, undirectable scientific progress. And yet, from a slightly different angle, we could see synthetic biologists’ attempts to create “kill switches” in micro-organisms, “reverse” gene drives, and other approaches to build-in safety controls as mirrors of the word on the Golem’s forehead, the scroll under its tongue.

– Motivations – Golems may be created simply to see if they are possible, but most stories focus on golems created for protection. The Golem of Prague protects its Jewish community from being framed for ritual murder. Synthetic biology is being asked to do many things, including to protect us – from the Zika virus, from the end of peak oil, from hunger and sickness and want.

– The Material of the Mundane – Jurassic Park opens in a jungle, where unnamed labourers unearth a chunk of amber with That Mosquito. The creators of the Golem shape him from the humble mud of their city’s river. Some argue that practices of bioprospecting are shifting from exploring areas far from scientific labs to staying at home, using advanced sequencing technologies to mine existing collections and even the back garden.

As one philosopher has pointed out, these are not perfect parallels. But hey, if they were, we’d apply the morals of the story to the practices of the technoscience and be done with it. This is not storytelling to shine a light on the path ahead; this is storytelling to help us think through what paths we might choose to forge. And I find the very multiplicity of golem tales as enriching these discussions. Whereas Jurassic Park 2, 3, and 4 largely repeat themselves, golem tales don’t have the same plots, the same moral lessons. How do we weigh the varied stories of control – between the tales where all works as planned, where all goes terribly wrong, and where all works as planned and yet there are still unintended consequences? Even when the Golem’s creators act with the noblest of intentions, golem tales are often warnings of the dangers of hubris. What if, instead of a small group of holy men devising a solution, the community had been asked what should be done? And if they requested a golem, how might the plot shift if a broader community was involved in its creation and oversight? Does using more mundane material from the scientists’ world affect how they relate to their work? Could it lead to a more intimate connection? What kinds of relations and responsibilities to their work do scientists and corporations have? Should this change when their work involves life?

Sure, Jurassic Park could be used to ask such questions, but at this point it has become a stand-in for pat moral lessons rather than opening up debate. The many tales of the Golem, both old and new, provide a less settled context for engaging with new life sciences. So let’s tell each other tales of golems, of muddy banks and dusty attics, of protectors and vigilantes, of care and complicity. Let’s tell these stories not simply to anticipate what synthetic biology will do for or to us, but to explore. What kinds of creations do we want, and what shapes those desires? What possible permutations of community could exist to look after such creations? Who are the creators we want to be?