A systemic separation of concerns: reflections on Synthetic Biology UK 2018

Last month, I attended the annual synthetic biology conference, Synthetic Biology UK 2018 (SBUK2018). For those unfamiliar with the field’s conference landscape, SBUK is an annual event positioned as “the premiere UK synthetic biology meeting”. It is organised by the Biochemical Society and normally supported in some capacity by the hosting organisation for that year. This year, SBUK2018 was hosted and co-organised by BrisSynBio, the University of Bristol’s Synthetic Biology Centre (and one of the six major Synthetic Biology Centres in the UK).

Over the two days, SBUK2018 showcased some fascinating science and some clever tools and techniques. Highlights for me included two inspiring talks on protocell development by researchers from the University of Bristol and the Max Planck Institute, an engaging talk about advances in analysing complex biological mixtures, and some great start-up mentality. Richard Owen also managed to insert a cat meme into his slides so also automatically deserves credit.

Figure 1. SBUK2018’s one and only instance of cat meme usage 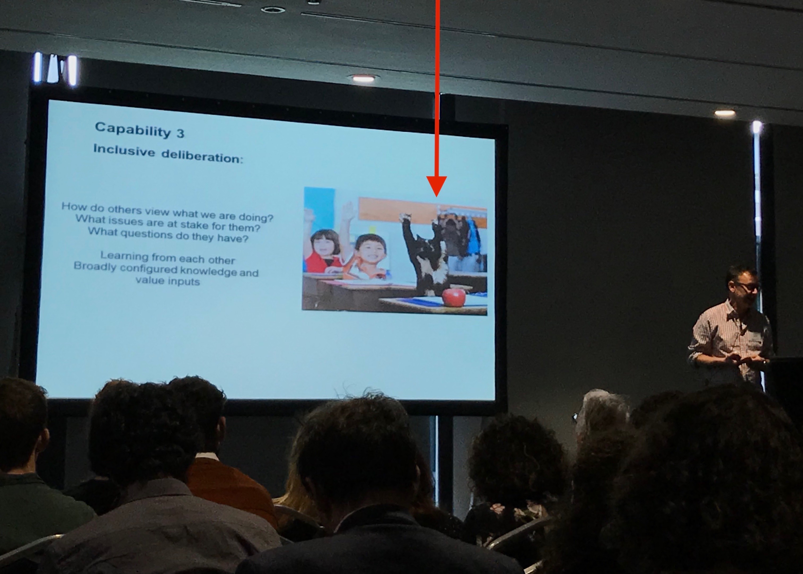 However, inspiring science and cats aside, what struck me most about SBUK2018 were the organisational barriers hindering social and scientific integration.

For me, this started with the very identity and orientation of the event itself. In effect, there were two parallel conferences: one to discuss the science, another to discuss the social dimensions. ‘SBUK2018’ itself was publicised as a two-day conference containing the ‘science programme’. Meanwhile, a separately run three-day programme of “synthetic biology satellite sessions, workshops and public engagement activities aligned with SBUK2018” was organised by BrisSynBio’s umbrella institute, Bristol BioDesign Institute (BBI). This included two afternoons dedicated to discussing responsible research and innovation (RRI), another event highlighting different social dimensions of synthetic biology (such as biosecurity, sustainability, language use, and art), and a public engagement session.

The epistemic distance created by having two programmes was reinforced by their actual physical organisation. The two RRI workshops overlapped with the science programme, forcing delegates to choose between scientific and social dimensions. These sessions were also held in separate buildings, quashing any casual idea of ‘dipping in and out’ of parallel sessions. The rest of the social science and public engagement activities were held after the science programme ended. Judging by the attendance at the science programme’s final presentations, few remained until the end of the science let alone any ‘book-ending’ peripheral events.

Meanwhile, the 25 scientific presentations of the science programme focused on tools, techniques, results and outcomes with negligible intellectual engagement of any broader social dimensions. The science programme did include two presentations and 10 posters discussing RRI; however, subsequent individual discussions I had with scientists about RRI were largely about its efficacy or confusion over what much of it meant. Additionally, many social science colleagues just outright missed parts of the science programme by simple merit of attending their own events. These examples do not, of course, do justice to the positive experiences I had, nor the complexity of engagement between scientists and social scientists. However, I couldn’t help but feel the positive interactions occurred despite the conference organisation, not because of it.

The distribution of event planning activities across multiple bodies itself is not unusual; different institutions are often better suited to organising different events. However, what particularly struck me was the positioning of these two programmes in relation to each other using words such as ‘satellite’ and ‘aligned’. ‘Satellite’ imagery (no pun intended) invokes ideas of the social dimensions events as separate, ‘tacked on’ and only peripherally connected to SBUK2018’s science programme. Whereas ‘alignment’ imagery invokes them as subordinate to the science programme. SBUK2018 was the place for discussing science, and the periphery was the place for discussing social science interests and public engagement.

For a community as reportedly vibrant and multidisciplinary as synthetic biology, this, to me, is problematic. Indeed, SBUK2018 declares itself a space for “a cohesive, vibrant and multidisciplinary community that is inclusive, open to innovation, collaboration and supportive of young talent”. The science programme’s RRI items notwithstanding, I was still left feeling it was primarily intended for scientists. This orientation is at best an own goal, and at worst a perpetuation of epistemic hierarchies within synthetic biology. Either way, it is a missed opportunity for the ‘premiere’ meeting in the UK to demonstrate how integrated synthetic biology can be. 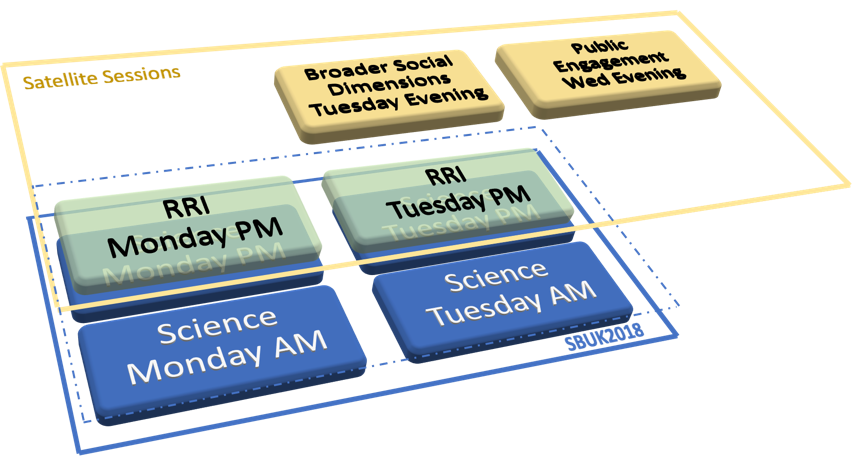 Upon reflection, this post could easily be interpreted as a pessimistic commentary on SBUK2018. Certainly, SBUK2018 did little to deliver on the promise of the “vibrant, cohesive and multidisciplinary community” I was hoping to experience as a social scientist. Equally certainly, the social science interests felt distinctly separate. However, mostly this just struck me as odd and not particularly reflective of the desire to integrate that I’ve seen within the synthetic biology community at Edinburgh. What emerges instead is an opportunity to learn from what didn’t work at SBUK2018, and for doing it better next year.

It is worth ending this post by noting that Balmer et al (2015) alert us to some potential characteristics of productive multidisciplinary collaborations that may prove useful. Two particularly pertinent ones include no one group having epistemic authority over the direction of the research, and social science interests not just being ‘tacked on’ (Balmer et al, 2015:16). For me, SBUK2018 failed in translating these characteristics to the conference space. Perhaps the organisers of SBUK2019 might consider these a little more robustly in planning next year’s event.