Health in the Eastern Mediterranean Region

The vast complexities of the Middle East and surrounding regions cannot be understood without bringing health into the battleground of analysis. In this context, the Global Health PhD Network organised the event “Health in the Eastern Mediterranean Region” on 28th of October, 2016 with the funding of the University of Edinburgh’s Global Health Academy. The event was framed as a series of four short conferences on diverse topics related to Health in the region, and two networking recesses at the venue’s foyer at 7 Bristo Square, where delicious kenafa was served by the University’s Middle Eastern Society.

The first speaker was Dr Runa MacKay. She studied medicine at the University of Edinburgh at a time where it was not usual for women to go this further in their studies. In 1955 after qualifying in medicine, Dr Mackay arrived at the Edinburgh Medical Missionary Society Hospital in Nazareth, now in Israel, which has served the Arab population there for more than 150 years. Dr Runa Mackay spent around fifty years working across Lebanon, Palestine, and Israel for the betterment of health conditions among the Palestinian population who live within Israel, either in health policy or as a practitioner in war torn Beirut and West Bank. Today, back in Edinburgh, she has written the book “Exile in Israel”, where she tells her personal experience throughout those years which have taken her to state, as she did in the event, that she feels more Palestinian than British.

As the second speaker, Khuloud Alsaba, researcher from the Syrian Center for Policy Research and a final-year PhD candidate in International Public Health Policy talked about part of her research project: “War in Syria: Political Determinants of Health”. In a very critical and insightful way she explained how within the discourse of “The War on Terror” health facilities and health care workers have become a legitimate target. However, turning access to health into a weapon of war has brought unexpected hardships for the population. Khuloud argued that polio, once an eradicated disease, has reappeared in Syria as a consequence of a thrashed and weakened public health system. She concluded by stating that these war tactics are not only militarily and economically inefficient, but also (and most importantly) a violation of the human rights of Syrians. 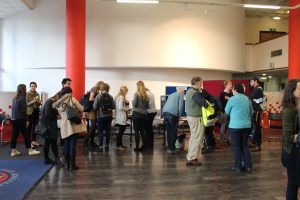 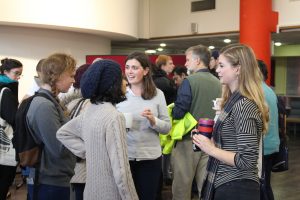 After a short networking recess, the event carried on with the third talk. Via videoconferencing, Ben Clavey, a young medical student and the co-coordinator at Medact Arms and Militarisation Group, gave a concise explanation about this NGO and its work in the Middle East. Medact is an organisation where health professionals can go beyond the clinic and actively engage with the search for solutions to the most pressing global health issues. Through analysis, lobbying, and education, it aims at having an impact in policy on four main areas: peace and security, climate and ecology, economic justice, and health and human rights. Regarding the Middle East, he added that Medact’s activity in the region has been extensive. It has worked in Iraq and Palestine performing in ground analysis and campaigning for the respect of human rights and adequate health policy for the victims of armed conflict in both countries. Recently, it has worked on warning and lobbying against airstrikes by the British military in Syria and also against UK arms sales to Saudi Arabia, who has been involved in the destruction of Yemen’s health system and the targeting of its hospitals and other healthcare facilities. Finally, Ben invited us to become part of Medact’s effort in taking health as a human right into policy either by donating or joining the organisation. A stand with further information for those interested in participating was set on the venue’s lobby as well. 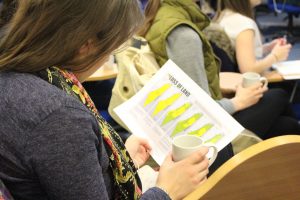 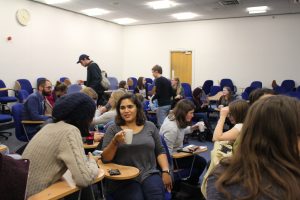 The fourth and last speaker was Parisa Mansoori, a PhD candidate at the Centre for Global Health Research at The University of Edinburgh, who presented her research project on Iranian health sciences and academic literature production. According to recent data, Iran has had a dramatic increase in the amount of health related academic publications in the past few years. This stands out as a unique situation among the emergent economies, due to the quality of the articles produced in Iran, which have found their way into high impact international journals. Moreover, Parisa pointed out that practically a large proportion of this new literature has been produced by a small group of academics in Tehran University of Medical Sciences and few other Tehran-based institutions. By providing a thorough characterisation of this phenomenon, she expects to lay ground for further progress and development of Iran’s health sciences and their contribution to the global scientific arena.

In conclusion, the event managed to assemble in a couple of hours a wide range of experiences related to health in the Eastern Mediterranean region. Just as this region has been traditionally associated with armed conflict and violent political struggle, health has also been a very pressing issue both then and now, as Dr MacKay and Khuloud Alsaba exemplified. However, as Ben Clavey from Medact and Dr MacKay let us see, there are still spaces for hope and resistance, as well as moments for empathy and sharing. Furthermore, in spite of these difficulties, the region hasn’t stopped creating new knowledge. As Parisa Mansoori portrayed, the region is home for highly qualified and capable academics who contribute to the development of science and knowledge around the world. Lastly, thanks to the networking sessions and kenafa tasting we were reminded that, as in any other place, there are people living everyday lives in this region, where the creation and recreation of very rich cultures has made of it a quite unique and special place.