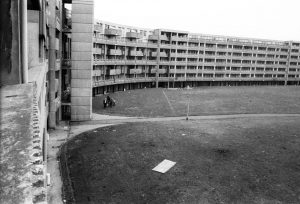 The 2016-17 PTRG Programme kicked off with a cross-disciplinary paper examining the interplay between political theory and architecture. Tahl’s research seeks to apply political theory frameworks not only to overtly political cases but also to approaches and case studies in architecture. In particular he focuses on the process of ‘récupération’, whereby critiques of dominant practices in either politics or architecture are ‘coopted’ by the very practices that they challenge. Through co-optation or récupération such critiques are ‘absorbed by society and transformed from a threat to the system into an integral part of it.’ Building on the work of a range of political theorists, most notably Ernesto Laclau, this paper looks to provide an analysis and reconstruction of this process in order to arrive at a model for better understanding how récupération functions within architecture. Tahl looks to situate this discussion within the context of the influential social critiques which emerged from the protest movements of 1968.

Our discussion touched on the interdisciplinary character of Tahl’s approach and the similarities and differences in forms of both critique and récupération in politics and architecture. This included questions about how récupération is experienced in these different spheres and the extent to which the concepts we use to understand récupération can be transported directly from one discipline to the other. We also considered whether some forms of critique are more resistant to récupération than others and, if this is the case, the characteristics which might define those critiques which are more récupération-proof. An important theme throughout the discussion related to the role which architecture does play, and the role which architecture ought to play, in challenging existing structures of social power.

Tahl Kaminer is Senior Lecturer in Architectural Design and Theory at the Edinburgh College of Art, University of Edinburgh.