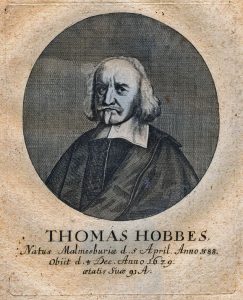 Maximillian Jaede’s paper “Thomas Hobbes’s Proto-Liberal Conception of Peace” is an introductory chapter to a larger book project of the same title. In the chapter, he argues that there are more points of convergence between Hobbesian and liberal conceptions of peace than we might think. Indeed, although ‘Hobbesian realism’ and ‘liberalism’ are often characterised as rivals, a Hobbesian vision of peace is best seen as proto-liberal.

The paper offers a survey of historical narratives to convey the notion of liberal peace, and then contrasts this with the Hobbesian vision, highlighting both points of convergence and divergence. For example, on both views peace is fundamentally about protecting individuals from violent encroachment. However, while a Hobbesian view treats this as a matter of good government and support of peace, liberals are particularly concerned with potential encroachment on individuals by the state. Similarly, on both views good government maintains peace, and “has a pacifying effect on international relations.” However, for liberals good government is understood in terms of constitutional provisions and human rights, whereas Hobbesian good government is focused on conduct rather than constitutional form.

Seminar discussion was lively, focusing on liberalism, methodology, and the aims of the project. While the Hobbesian vision was based closely on readings of his texts, who does the author target when he refers to ‘liberals’? The label has been used to refer to a significant range of views, and not all are obviously in line with the account offered in the paper. On methodology, some wondered if Maximillian subscribes to a particular school of the history of political thought, or felt that a window into his methodology might give more context to the knowledge claims in the paper. Finally, some asked what this interpretation of Hobbes’s conception of peace can offer us – can it be used for critique or applied to contemporary challenges?

****
Maximilian Jaede is a Postdoctoral Fellow at the Institute for Advanced Studies in the Humanities, University of Edinburgh.