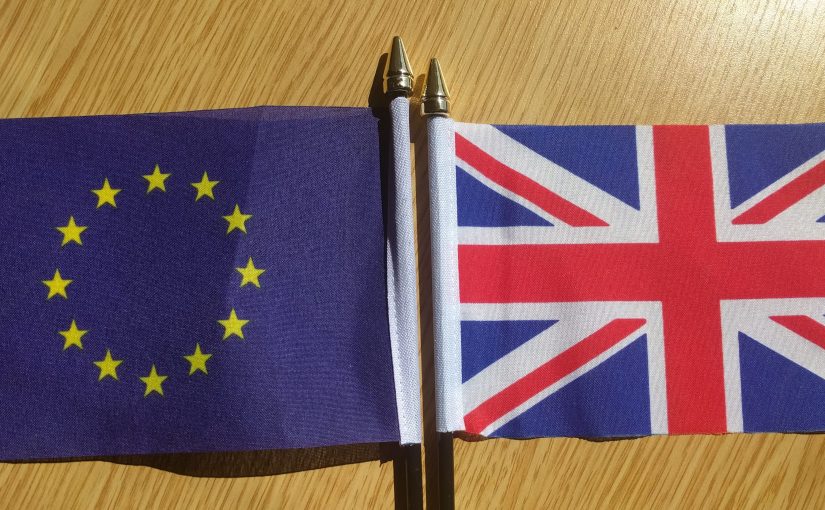 Much of the acrimonious debate on Brexit of the past few years played out on Twitter. But the sheer volume of Tweets on the subject, and the oft-cited ‘echo chamber’ phenomenon make it difficult to gauge what this conversation looked like. What kind of messages were prominent on Twitter? Which side of the Brexit debate was strongest? How did this change over time? How were Theresa May and Boris Johnson judged in their tenure as prime minister?

Over the past several weeks our team in the University of Edinburgh’s Neuropolitics Research Lab has been working to answer these very questions, drawing on a unique dataset of over 500 million Tweets obtained during the Brexit process in order to conduct original research on the role of Twitter in the debate.

We analysed nine ‘spikes’ in the data which was collected between June 2017 and January 2020, where Brexit-related activity on Twitter flared. Spikes were identified as those days where the number of tweets related to Brexit exceeded 75,000 tweets. Where two or more 75,000 tweet days occurred within 7 days of each other, we allocated these to the same spike.

We extracted the top 100 most retweeted tweets from our spikes. Each of these would be coded as pro, anti, or neutral on Brexit.  They would then be sorted into one of 15 categories related to the Brexit deal. Each of these categories could be referred to by the tweeter in a positive, negative, or neutral way, producing a three-level coding system for each tweet.

Using these nine spikes to paint a picture of the Twittersphere and how they were reacting to the Brexit debate over time, we discovered that the sentiment on Twitter is mainly negative towards Brexit. This feeds into the narrative that Twitter is a reactionary platform, where opinions are rarely published by those that are happy with the status quo. 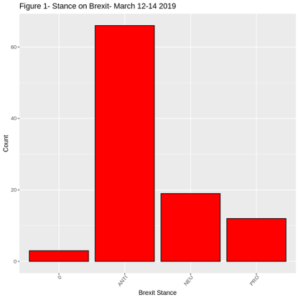 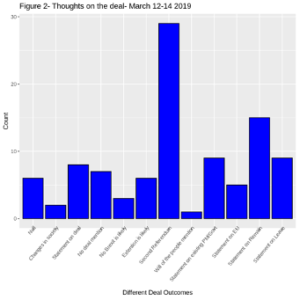 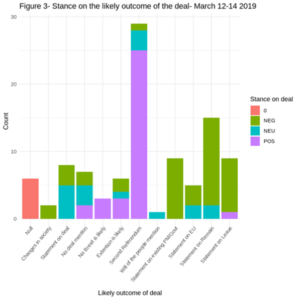 The most anti-Brexit spike appears to occur between the 12th and 14th of March 2019. Events that occurred during this spike included Second Meaningful Vote, the ruling out of no deal by Parliament and Parliament asking the Government to delay Brexit. These events contributed to Theresa May’s resignation in the Summer of 2019.

Figure 2 shows that the popularity of anti-Brexit tweets during this period is fuelled by the huge intensity of tweets about a second referendum (or People’s Vote). Figure 3 illustrates this in more detail, showing the mood of each tweet on the likely outcome of the deal. From Figure 3, we can see that tweets referring to a second referendum were largely positive, meaning they were generally anti-Brexit. 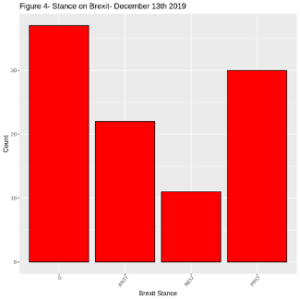 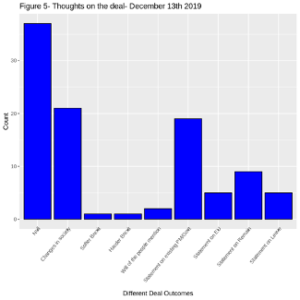 The most pro-Brexit spike occurred on December 13th 2019 as the results of the 2019 General Election were being revealed. Boris Johnson and the Conservative party had won a big majority with their pro-Brexit manifesto. Additionally, Jeremy Corbyn resigned as leader of the Labour Party, which had pledged to offer a second EU referendum should they win the Election.

This was the first and only time that the number of pro-Brexit tweets outnumbers the anti-Brexit ones. This perhaps shows that even the pro-remain Twitter discussion was related to the realisation that Brexit was inevitable by this point. Figure 5 shows that those tweeting about Brexit were reflecting upon its changes to British society and making statements about the PM and the Government. According to Figure 6, many of these tweets on these two subjects were positives. This shows that both Boris Johnson’s actions as Prime Minister and Brexit were now viewed, at least on Twitter, in a positive light. 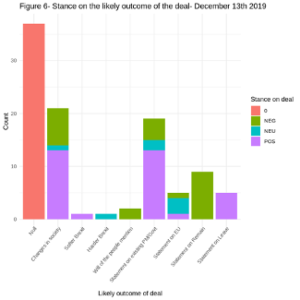 However, this must be prefaced with the fact that it is just one day, occurring the day after the biggest election defeat for the Labour Party in 84 years. Thus, it can be expected that supporters of this party, often vocal supporters of remain, would be quiet on social media on this day.

When we compare the data across time, we can get a sense of the relative popularity of leaders and how this changed during the Brexit process. Figure 7 shows the number of tweets in each spike that have been categorised as making a statement on the current Prime Minister or Government. These tweets have been split into negative, positive, and neutral sentiments. Theresa May’s premiership ended on the 24th of July 2019. This means that she was in charge for the first 6 spikes (her last spike being the 27-29th March 2019). Boris Johnson’s premiership is reflected in the last 3 spikes analysed.

Interestingly, only one positive tweet about May’s leadership was recorded. This would suggest that May’s approach to Brexit was widely disapproved of in the Twittersphere. This was reflected in reality, as May was constantly under pressure from her party and the public. Indeed, May was not trusted by Leave MPs and voters to deliver the best form of Brexit and was disliked by Remain MPs and voters for pushing a harder Brexit than many expected. 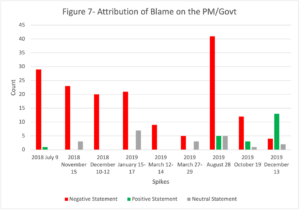 And yet there is a downward trend in the negativity towards May’s leadership as the Brexit timeline progresses. This could reflect the gradual realisation that Brexit was becoming an increasingly impossible task, and that May was caught up in a very challenging situation politically.

Judging by the way May was received, we would expect Johnson to be especially loathed by Remain supporters and fully embraced by Leave supporters. This supposition is supported by the data, with Johnson receiving both the highest negativity during the 28th of August 2019 spike and the highest positivity in the 13th of December 2019 spike. It could be argued that Johnson’s growing approval on Twitter is recognition of him doing well and delivering Brexit, something his predecessor failed to achieve.

Others may argue that Brexit-related narrative on Twitter , and the public more broadly, were becoming fatigued by their criticism of the Prime Minister, since it clearly and no impact on his agenda. As the graph above shows, Remain voices became quieter as the Brexit process became more ‘inevitable’, and leave voicers became louder as they saw what they voted for in 2016 finally becoming a reality.

In sum, we can see that the Twitter debate on Brexit tended to have a Remain bias during the Brexit negotiation process. The stance toward Brexit became softer towards the end of the Brexit negotiation process. By the end of this analysis, discussion had become largely pro-Brexit, arguably reflecting the public mood of satisfaction with Johnson among Leave supporters and grudging recognition of the realities of Brexit in the Remain community.