A different Scotland is happening 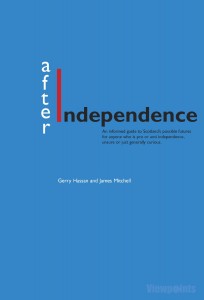 At the launch of their new book, After Independence, Gerry Hassan and James Mitchell discuss the constitutional options for Scotland, the implications of the white paper and the potential to expand the debate.

Many words will be written this week and in the years to come about the independence debate and the publication of the Scottish Government White Paper on independence launched yesterday in Glasgow by Alex Salmond and Nicola Sturgeon.

All of this has come about after negotiations between the UK and Scottish Governments. They agreed the question to be put to the Scottish people, about who could vote and the rules of the referendum. The two Governments and campaign organisations associated with each side seek to define the terms of the debate: independence vs. separatism; hope vs. fear; change vs. continuity.

There is nothing unusual in this. Elections and referendums in liberal democracies are about giving the public an authoritative voice on pre-determined choices.

As a device for consulting the people, the referendum is now more commonly used in the UK than the past. It has value in ensuring that a decision carries the legitimising power of public support, as happened in the 1997 devolution vote. But referendums have their limitations. They encourage highly adversarial politics and limit choices to what is on offer at the ballot box, even if the public might prefer something else. These features can limit public involvement to being spectators.

While little can be done about the choices available at the ballot box, there is no reason for limiting the scope of this debate. The referendum may have been a Government initiative but there is no reason why anyone need stick to a limited agenda.

The referendum may have come about through inter-governmental bargaining but the debate cannot be limited by government or the formal campaign organisations. There is no disputing the relative powers of these and the conventional media in setting the terms of the debate, but there has been growing evidence from across Scotland that this referendum is encouraging a multiplicity of people and bodies to articulate their own fears, hopes and expectations.

Much of this might at first sight appear to have little to do with the referendum question. However relevant or otherwise, the referendum is proving a useful means of discussing what kind of Scotland we want to live in, which cannot be boiled down to whether Scotland should or should not be an independent country.

The referendum and independence debate does not belong to any party, government or campaign group. Neither does it belong to the conventional media or ‘experts’ explaining the meaning of white papers or opinion polls.

There is no doubt that insider opinion has had and will continue to have the dominant part in setting the agenda of debate. But, paradoxically for a device that puts the voting public at the heart of the decision, the wider public needs to assert itself and find means of insinuating itself into this debate.

Referendums can be dangerous devices for sponsoring governments. The people do not always answer as expected or hoped for. It is conceivable that the result will end up pleasing neither government or camp. The result may prove contestable – and a close result is bound to be contested whatever may be said by both sides just now.

But this referendum offers an even bigger prize than that imagined by insider Scotland. It is about the kind of society we want and what kind of collective future we would like to bring into being. It offers an opportunity to raise awkward questions and challenge each side to outline where we are going, not just in the narrowest sense of constitutional politics but how we constitute ourselves in the widest sense.

Over the last two decades and more, constitutional debate across the globe has been far more expansive than the narrow debate that insider Scotland would have us focus upon. Modern constitutions commonly include references to gender rights, social and welfare rights and much more besides. Scotland’s constitutional debate needs to enter the modern world too.

The greatest challenge lies in addressing ‘missing Scotland’ and what has been become called ‘the missing million’: the part of Scotland’s electorate which has slowly and inexorably slipped out of our democracy and stopped voting in the last generation. This dynamic reflects the increasing concentration of politics on a narrow range of issues, the focus on ‘swing’ voters in marginal seats, and the decline of such factors as class and party identification.

It is true that turnout at elections has declined in many – though by no means all liberal democracies – a point underlined in Philip Coggan’s ‘The Last Vote’. But no one should be allowed to hide behind a general Western trend. Both sides in this referendum claim to be reaching out to a wider public, engaging in new ways and bringing people into their campaigns who had never previously been involved.

There is no reason to disbelieve this but the challenge comes with the results not just in the proportion who voted but the difference that participation makes. Who are these new political activists? What do they bring to our politics and what will be the longer-term consequences of their engagement?

The referendum and independence debate cannot be left solely in the hands of this ‘insider Scotland’ with their exclusive claims to representing and understanding the popular will. If it is to maximise change and political participation, there must be an acknowledgement of the diverse voices of ‘outsider Scotland’ who have been too often forgotten about, or paid lip service to in the language of the supposed ‘new politics’.

It would be disappointing if they merely represent an exten

sion of insider Scotland – more middle aged, middle class white men. Our experience of devolution suggests that having a better gender balance is an improvement but hardly revolutionary. The lesson of the last decade is that representation of a slightly more diverse range of people is not enough.

This entails thinking about politics, political change and the roles and expectations on public bodies and institutions in a more multi-layered way reflecting the numerous pressures, demands and expectations in public life. Scottish politics for too long has been traditionally defined in a very narrow, constricting manner, which has left politics in the hands of insider groups, and the sum total of change at best swapping elites while the people watch.

The referendum and independence debate cannot be left solely in the hands of this ‘insider Scotland’ with their exclusive claims to representing and understanding the popular will. If it is to maximise change and political participation, there must be an acknowledgement of the diverse voices of ‘outsider Scotland’ who have been too often forgotten about, or paid lip service to in the language of the supposed ‘new politics’.

Two very different timescales are evident in this debate. The first is that Scotland has ended up having this independence debate sooner than most people assumed. The consequences are clear to see all around: the anger and dismay of certain pro-union voices, a general bewilderment and incomprehension in many undecided voters, and an over-zealousness and simplicity in some pro-independence opinion. But what is also happening is that in a very short space of time the idea of independence, once on the fringes of political life, has become mainstream.

If the first is the shortened road to the referendum, the second is the long road to the referendum (in the short term frame of 2011-14). This has allowed a host of self-organising, self-motivated groups to emerge outwith the reach of institutional Scotland. There is a generational shift in this, a gender dimension and the rise of social media; perhaps most importantly this signals a move from an over focus on ‘hard’ power to ‘soft’ power.

This week is a watershed moment, and it would be good if more of our debate could pause and reflect this and be more humble, generous of opposing views, idealistic and outward focused on the challenges ahead. It is in this spirit that we planned and commissioned ‘After Independence’, officially published this week, which collects two dozen essays on different aspects of independence, ranging far and beyond the narrow definition of constitutional politics – to economic, social and cultural policies, the nature of the UK and England, defence and international dimensions.

Whatever the final outcome on September 14th 2014 Scotland is being dramatically changed by this debate and irrespective of whether we vote Yes or No, Scotland, the union and the UK will never be the same again. This shows the shortsightedness of those who are already rushing to call the result, the latest of which is ‘The Economist’ ‘The World in 2014’ which has boldly declared, ‘The Scots will vote no to independence’. Instead, we should see this debate and result as part of a journey on the road to a politics and culture of self-government.

The phrase, ‘Another Scotland is possible’ is used by some of the new forces of the left gathering around this debate. Many mainstream voices scoff and pour cynicism on the naivety and idealism of such groups ignoring the scale of change Scotland has underwent in the last thirty years.

We have not and will not reach a final destination in this debate or in our society and politics. Rather than say, ‘Another Scotland is possible’, it would be more accurate to say, ‘A different Scotland is happening’. We just do not yet fully know the shape of that Scotland, who will emerge as the winners and losers, and the scale and form of the greater self-government.

Gerry Hassan is Research Fellow in cultural policy at the University of the West of Scotland. James Mitchell is Professor of public policy at Edinburgh University. Their collection, ‘After Independence’ is officially published by Luath Press priced £12.99. This blog was originally published on Open Democracy.