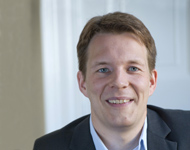 In the first of a series of monthly blogs on the independence referendum from Edinburgh University’s School of Economics, Dr. Robert Zymek weighs up the practical considerations around the currency arrangements of an independent Scotland.

The politics of Scotland’s currency arrangement pose a conundrum for advocates of independence. On the one hand, polls show overwhelming support among Scottish voters for keeping the pound. Chancellor George Osborne seized on this when, on April 23, he suggested that England, Wales and Northern Ireland could veto a currency union with a newly independent Scotland – a scenario that may deter potential Yes voters in next year’s referendum. On the other hand, retaining the pound may trap Scotland in an uneasy live-in arrangement with the rest of the UK. The No campaign has exploited this inconsistency, with Alistair Darling declaring that such a currency union would “undermine Scottish independence”. The SNP’s official response has been to argue that a formal currency union between Scotland and the rest of the UK – a so-called Sterling zone – would be in the interest of both countries if Scotland were to become independent. (See also Alex Salmond’s article in the 5 May 2013 edition of the Mail)

While the question of an independent Scotland’s choice of currency is hard to disentangle from political strategy as the referendum campaign heats up, it is clear that the eventual nature of the currency arrangement would have profound implications for the Scottish economy. In this post, I will explore the pure economic angle on this choice, conveniently leaving political and legal considerations aside. 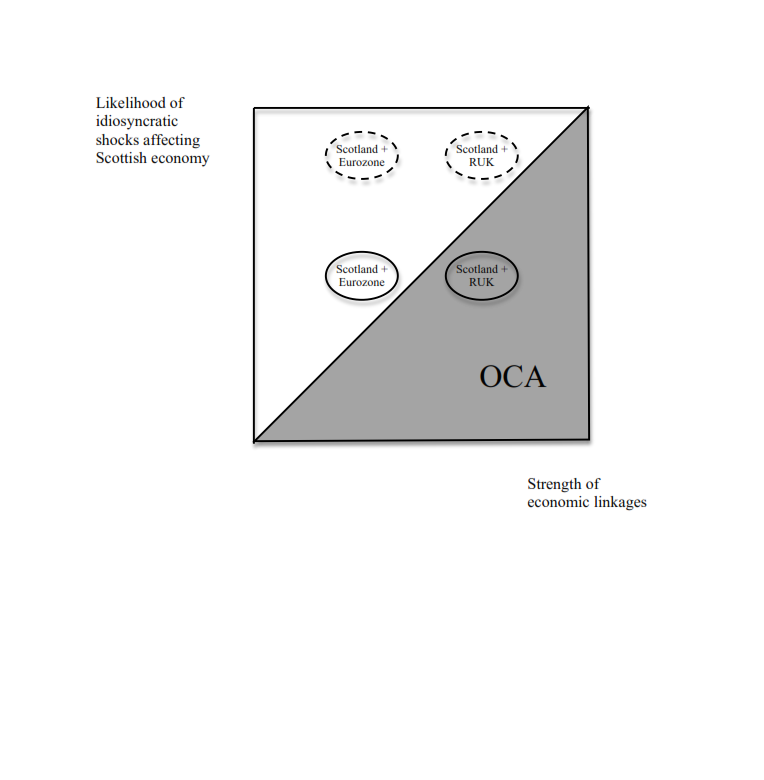 In principle, Scotland could opt for one of three currency regimes: i) keeping the pound – unilaterally or as part of a formal currency union with the rest of the UK; ii) joining the euro; or iii) setting up its own currency. To evaluate these options, it is useful to refer to the “Theory of Optimum Currency Areas” which was developed by the Canadian economist Robert Mundell in 1961 (and which helped win him the Nobel Prize in 1999).

Such dynamic considerations mean that the optimal currency arrangements cannot be chosen based on historical market integration and business-cycle synchronisation alone. An independent Scotland’s choice of currency should also reflect its intended place among the economies of Europe.

Mundell showed that two regions were more likely to form an Optimum Currency Area (OCA) if they had strong trade and financial linkages, and if their cycles of boom and bust coincided. The first part of the argument is straightforward: the more two countries trade with one another, the more damaging is the risk of sudden movements in the exchange rate, and the more beneficial the stability guaranteed by a common currency. The second part follows from the fact that two countries which share a currency must also share a central bank: the bigger the differences in economic conditions in different parts of the currency area, the more difficult it is for the central bank to set interest rates so as to provide economic stability for the area as whole.

How can these criteria inform Scotland’s optimal currency choice? At present, the Scottish economy is much more tightly integrated via goods trade and capital flows with the rest of the UK than with the Eurozone. At the same time, there are major economic shocks – most notably a decline in the oil price – which could put Scotland’s business cycle out of sync with both regions. The question is how likely such shocks are. The diagram below illustrates this point. If the risk of an economic shock affecting Scotland alone is low (solid circles), Scotland and the rest of the UK may represent an OCA due to their strong economic linkages, but Scotland and the Eurozone may not. If the risk of a Scotland-specific shock is high (dashed circles), it may be best for Scotland not to share a currency with either region.

Even in the latter case, Scotland may prefer to be part of a Sterling zone rather than the Eurozone. Thanks to an open border and common language, Scottish workers can easily move Southward in search of jobs, and Scottish savers are heavily invested in English banks and companies. This insures firms and workers against an isolated downturn in the Scottish economy.

Such dynamic considerations mean that the optimal currency arrangements cannot be chosen based on historical market integration and business-cycle synchronisation alone. An independent Scotland’s choice of currency should also reflect its intended place among the economies of Europe.

Next month, my colleague David Comerford will take a closer look at the constraints a hypothetical Sterling zone would impose on Scottish fiscal and prudential policy after independence.

Dr. Robert Zymek is a Lecturer in Economics at the University of Edinburgh.

2 Responses to Debating a Scottish Currency