Glasgow University’s Referendum: A sign of things to come? 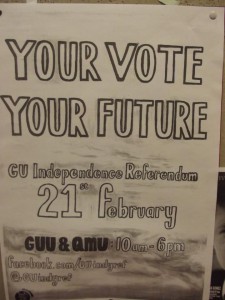 Your Vote, Your Future

Charlotte Snelling, a postgraduate researcher on youth participation and engagement reflects on Glasgow’s mock referendum on independence, cautioning against viewing the exercise as indicative of youth turnout and preferences in 2014.

On Thursday, students at the University of Glasgow took to the polls in the first high profile mock independence referendum since the Edinburgh Agreement was signed. Both the official Yes Scotland and Better Together campaigns were well represented on campus, supplying campaign materials and resources to the student groups representing them and even politicians themselves joining the campaign trail to rally supporters, highlighting the significance each side were attaching to the event. The result saw just under two thirds (62 percent) of students voting in favour of maintaining the union but what, if anything, can really be learnt from this?

The result was reported by the media as a blow to the Yes campaign and to the Scottish National Party. The 18 to 24 year old electorate is widely considered a key constituency for the pro-independence movement and for some this assumption was even felt to have driven the SNP government’s decision to extend the franchise to 16 and 17 year olds for the referendum. Students themselves are deemed particularly likely to favour the SNP’s vision of an independent Scotland with the party’s continued commitment to free university education. The Glasgow University referendum suggests, however, that such assumptions have perhaps been misplaced. It is true that in recent polls 18 to 24 year olds have consistently been coming out as some of the most in favour of independence – the latest Ipsos-MORI poll has support at 58 percent – and yet, if participation in the referendum follows that of elections, higher education students are arguably some of the most likely young people to be turning out in 2014. It is telling that within the recent Ipsos-MORI poll, only 60 percent of young people surveyed were certain to vote casting doubt on the extent to which favourable youth polling will translate into a pro-independence youth vote. There may still be reason therefore for Yes Scotland to be concerned by Thursday’s result, young voters considered some of the most likely to turn out matching more closely wider polling in which independence currently seems doubtful (55% anti, 34% pro, 11% undecided).

Ultimately however, whilst the mock referendum provides an interesting talking point and will no doubt influence both campaigns and their mobilisation strategies for students, we should steer clear of putting too much stock in the event as a predictor of student participation.

Turnout across the university was low, just 11 percent compared with 15 percent for the 2012 Student Representative Council elections. Only 2,589 students took part from a student population of 23,000 – but it is probably unwise to make projections of youth or student turnout in the referendum proper on this event alone. Mobilising anyone to participate in a mock election or referendum is always going to be hard where the only real benefit is the potential to increase the morale and momentum of the individual’s preferred side in the case of a victory. The low turnout should not necessarily therefore be seen as indicative of apathy or a lack of interest in Scotland’s constitutional future amongst students. More likely is that a large number of students will have either been undecided on the issue (this is certainly the view of Yes Scotland’s Chief Executive Blair Jenkins) or simply not felt strongly enough either way to consider the possibility of boosting or alternatively weakening either campaign as benefit enough to outweigh the costs of actually visiting the student union to vote. There is no way of knowing how many of the students voting in the mock referendum are those that will be eligible to vote in 2014. It is possible, for example, that international or exchange students participated and with anonymous ballots we are unable to assess the degree to which ‘voters’ were representative of the GlasgowUniversity population, let alone students across Scotland. Consequently, things do not look so bleak for the Yes Scotland campaign after all. Whilst still a setback and one which has presented Better Together with an opportunity to dent the confidence Yes campaigners may have had in being able to secure the youth vote, there is little reason for believing the referendum result provides an accurate prediction of the 2014 outcome.

What can be inferred from the result is that the Better Together campaign was better able to mobilise supporters on this occasion and so as the campaigns continue to devise strategies to target student voters in the run up to the referendum, some lessons can be learnt. Interestingly, whilst student groups on both sides of the debate enjoyed support from political figures, the Yes Scotland campaign was notable for its high profile names particularly with the Deputy First Minister herself taking time out to join students and encourage others to participate. Better Together, whilst still supported by figures including Liberal Democrat leader Willie Rennie, was described as a more student-led campaign. Despite Nicola Sturgeon’s popularity, the Yes campaign may wish to focus more on developing grassroots student networks and allow voters to engage more directly with the issue, a message that research indicates may resonate more strongly with young voters.  Thinking more broadly about the issues on which the sides may focus there are also implications commitments to maintaining free higher education may not be enough to attract student voters (if it were we would expect the SNP to have perhaps enjoyed greater support last Thursday), and therefore that party- or issue-based appeals will perhaps be less effective in mobilising students.

Ultimately however, whilst the mock referendum provides an interesting talking point and will no doubt influence both campaigns and their mobilisation strategies for students, we should steer clear of putting too much stock in the event as a predictor of student participation. The referendum is still a year and a half away and as with wider opinion polls, it would not be unsurprising to see the student vote fluctuate in response to the development of both campaigns.

Charlotte Snelling is a Phd student in Politics at the University of Edinburgh, researching the political participation of higher education students. She previously worked at the Scottish Youth Parliament.