Higher Education in a Small Country 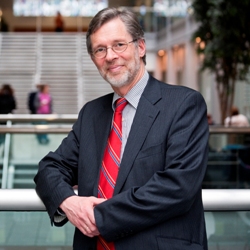 In 2011 I was appointed Principal and Vice-Chancellor of Robert Gordon University, Aberdeen. As my name maybe doesn’t suggest, I am an Irish citizen. Born in what was then West Germany, I moved with my family to Ireland when I was 7 years old, and have spent the greater part of my life since then in that country. For ten years, between 2000 and 2010, I was President (i.e. Principal) of Dublin City University, and I worked closely with the Irish university sector and with the Irish Government during those years in order to help build up higher education and generate innovation and R&D. Despite the awful financial shock and recession that overtook us towards the end of that time, working in this role in Dublin was exciting and rewarding.

So what have I brought with me from Ireland to Scotland, as it were? There are a few insights I might offer. First, small countries can do very well. Ireland may have been brought low by its property bubble and the mistake (as it turned out to be) of socializing bank debts, but it has also emerged relatively quickly and smartly from the recession, exited the EU/IMF bail-out and returned to growth.

Secondly, small countries, like larger ones, can successfully attract high value, knowledge-intensive investment. Even during the worst periods of the recent recession, and under the burden of the bail-out, Ireland was able to attract more investment in R&D by international companies than any other European country. This has been particularly true in the life science and pharma sector, where product innovation coming out of Ireland is now a notable feature of the industry.

It could be argued that the most hopeful future scenario is one of autonomous decision-making (with some shared sovereignty) in which local initiative and enterprise can be unlocked.

Thirdly, recent years have demonstrated the wisdom of Ireland’s policy from the 1990s onwards of making targeted investments in high value skills and specific research areas. The phenomenal growth of Ireland’s software industry would not have been possible without the specific decision to target university-level funding of computing programmes. Without this the huge investments by Intel, Microsoft, Apple, HP and others could not have happened. The same has more recently been true of the pharma sector.

Fourthly, and related to that, the funding by the government of the so-called Programme for Research in Third Level Institutions (PRTLI) and the establishment of Science Foundation Ireland created the basis for moving up the value chain in industry terms by targeting joint academic-industry research in priority areas. These were expensive but hugely intelligent decisions.

Finally, Ireland’s ability to manage its own fiscal policy reinforced all of the above, creating an attractive climate for investment and also, for much of this period, buoyant revenues. You cannot maintain a successful economy without fiscal autonomy. Attempts by the EU to encroach on that have been resisted.

What does all this mean for a Scotland contemplating independence? There are of course, as ever, arguments for and against embarking on this national journey. But the suggestion that Scotland would not easily be able to flourish outside the United Kingdom is not borne out by the Irish experience. Scotland right now has a much lower level of local innovation, and far less entrepreneurship, than Ireland has. It has in many ways developed a national dependency culture, in which a (perhaps generous) contribution from London is seen as safer than an indigenous innovation culture. It could be argued that the most hopeful future scenario is one of autonomous decision-making (with some shared sovereignty) in which local initiative and enterprise can be unlocked. It is, at any rate, one worth contemplating.