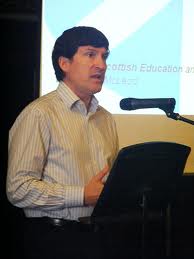 It is a commonplace that language plays only a small role in Scottish nationalism, in contrast to counterpart movements in Catalonia, Quebec and elsewhere. While this is an oversimplification, it is indisputable that language issues have not been prominent in the current debate over Scottish independence. There are also practical reasons for this limited attention, for the Scottish Parliament already controls most of the areas of policy in which language issues tend to arise, most obviously education and culture. Nor has there been an extensive debate conducted in Gaelic concerning the pros and cons of independence. Gaelic counterparts of pro-independence groups such as Yes Scotland have recently been set up on Facebook  and Twitter, for example, but have attracted few followers; by and large, Gaelic speakers, all of whom are bilingual, appear content to take part in (or ignore!) the mainstream English-medium debate.

Insisting on an English-only policy in relation to the momentous decision on independence is at best a missed opportunity, at worst a calculated derogation that goes against the stated policies of the Government and the Parliament to promote the language.

A potentially significant issue has recently come to the fore, however: should the referendum ballot paper be bilingual, presenting the question in Gaelic as well as English?

The Scottish Government has so far refused to authorise a bilingual ballot paper, angering many Gaelic activists and organisations. In response to a parliamentary question from Angus MacDonald MSP, the Deputy First Minister stated on 25 February 2013  that:

The Scottish Government does not plan to provide a Gaelic language version of the ballot paper for the independence referendum.

As part of the question assessment process, the Electoral Commission tested the proposed question with voters who speak Gaelic as a first language. The Commission found that these participants could understand the question easily and experienced no difficulties in completing the ballot paper. . .

Voter information will be available in other languages, including Gaelic, on request. Counting officers may also choose to display a translation of the ballot paper at polling stations if they consider this appropriate. This is standard practice for all elections.

The Deputy First Minister reiterated this position on 27 April in a letter to Angus MacDonald in his capacity as convener of the Cross-Party Group on Gaelic.

On 16 May, a petition demanding a bilingual ballot paper was lodged with the Scottish Parliament by Gaelic campaigner Iain MacLeòid, president of An Comunn Gaidhealach. The petition had attracted more than 700 signatures by its closing date on 5 June. The issue is now being taken up by the Scottish Parliament’s Referendum (Scotland) Bill Committee in its consideration of the referendum bill, most recently at the stage 1 debate on 23 May. In its written submission to the Committee, Bòrd na Gàidhlig, the statutory language board, expressed its disappointment at the Government’s position and submitted a draft version of a bilingual ballot paper, posing the question ‘Am bu chòir do dh’Alba a bhith na dùthaich neo-eisimileach?’ alongside ‘Should Scotland be an independent country?’ Other Gaelic organisations and supporters have lent support to this view, and there has been extensive discussion in Gaelic newspaper columns, blogs and other on-line fora.

The principal argument advanced by those demanding a bilingual ballot paper is that Gaelic speakers should be able to express their view on this historic referendum in their language of choice. The Gaelic Language (Scotland) Act 2005 has the aim of ‘securing the status of Gaelic as an official language of Scotland commanding equal respect with the English language’. An underpinning principle is that Gaelic should be legitimated and encouraged in Scottish public life generally. Insisting on an English-only policy in relation to the momentous decision on independence is at best a missed opportunity, at worst a calculated derogation that goes against the stated policies of the Government and the Parliament to promote the language.

Whatever the stated rationale for the Government’s position, it seems reasonably clear that political calculation plays a role. As part of its general strategy of endeavouring not to ‘frighten the horses’ in relation to the referendum vote, the Government may well fear that a bilingual English-Gaelic referendum paper could alienate some wavering voters who might (quite unrealistically) see Gaelic as some kind of nationalist totem. A number of Gaelic-speaking independence supporters have backed this view, arguing that the symbolic value of a bilingual ballot paper is outweighed by this political risk.

It is unfortunate that the issue of Gaelic in electoral materials was not dealt with at some earlier point, with bilingual ballots being introduced in a less momentous election and slowly normalised. In Wales, by way of contrast, bilingual Welsh-English ballots have been used not only in the 1979, 1997 and 2011 devolution referenda, but in all Assembly and local authority elections.

Perhaps the most problematic aspect of the Government’s approach to this issue has been the rationale provided by the Electoral Commission for not issuing a bilingual ballot paper: that all the Gaelic speakers who were shown the test ballot stated that they were able to understand the English version. (The Government rather than the Commission is properly to blame here, as the Government chose not to ask [p. 35] the Commission to test a bilingual ballot paper or a version with a Gaelic option). This argument completely misunderstands the rationale for Gaelic promotion in contemporary Scotland. All Gaelic speakers can speak and understand English – not least because of the government education policies from 1872 onwards that made almost no provision for Gaelic. Materials and services are not offered in Gaelic because Gaelic speakers cannot understand the English ones, but because Gaelic is recognised as a language deeply rooted in Scotland that is entitled to ‘equal respect’ under the law. The principle that no provision will be made for Gaelic except for those who cannot understand English is entirely out of keeping not only with the Gaelic Language Act but also with the European Charter for Regional or Minority Languages, which the UK Government ratified in 2001.

Were this principle to be adopted more widely, a wide range of promotional initiatives, in education, broadcasting and elsewhere, would need to be rolled back. For example, the Scottish Government (and many other public bodies) produce a range of written materials in Gaelic. Ironically, these include the consultation document on the referendum itself. It is obviously illogical for the Government to solicit the views of Gaelic speakers on the issue of independence through the medium of Gaelic and then insist that the final, determinative expression of their views be made in English. However, if the Government’s position is essentially an issue of political calculation, then principle and logic may not necessarily win the day.

9 Responses to Lost in Translation