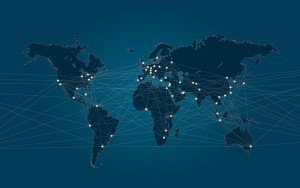 Coree Brown rounds up coverage of Scotland’s referendum in the international press.

The Wall Street Journal covers First Minister Alex Salmond’s trade visit to China, noting that while China has adopted a zero tolerance party on autonomist movements within its own borders, it has ‘nothing against whisky-toting separatists who annoy only foreign governments’.

An editorial in the Montreal Gazette reflects on the Parti Quebecois’ response to the federal Clarity Act. Bill 99 asserts that Quebec can unilaterally separate on the basis of a 50% plus one referendum, with a question chosen by the Quebecois government. The editor argues that Scotland’s referendum should be held as a model for future votes on independence, with a clear question agreed upon by both sides rather than a referendum held without extensive consultation of both sides.

In the New York Times, Parag Khanna reflects on the Alternative Worlds report, published by the United States National Intelligence Council in 2013. The report discussed the possibility of a ‘Nonstate World’ in 2013, a scenario in which traditional states were subsumed by global and economic forces. He discusses this scenario in light of the rise of cities and their mayors as well as nationalist movements in Western Europe as well as Asia and the Middle East.

Writing in The Herald, David Leask provides insight into the Scottish referendum from the perspective of Quebec. He notes that internationally, Scotland’s vote is increasingly being framed as a contrast between a social democratic Scotland and a neo-liberal England.

Coree Brown is a PhD student in Politics at the University of Edinburgh.