The West Lothian question taken to a new level 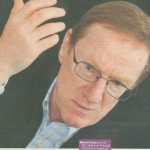 In a oped originally published in Scotland on Sunday, Professor Michael Keating discusses the implications for David Cameron’s proposed referendum on Europe, drawing attention to isolationist tendencies amongst British Conservatives.

David Cameron is heading into a cul-de-sac. He promises a referendum on a prospectus that cannot be delivered and, even if it were, would satisfy neither his Euro­phobic backbenchers nor pro-Europeans.

He wants to redefine the UK’s position within the European Union, picking and choosing and free-riding on the internal market without paying the subscription and accepting the obligations of membership. There is no reason to think other member states would accept this.

His speech was vague on particulars and it, and previous interventions, betrays an ignorance of how Europe works. He mentioned European regulation of doctors’ working time, a reference to the Working Time Directive. But there is already an opt-out from the 48-hour week here in the UK.

Previously he has talked of withdrawing from the Social Chapter. This no longer exists, having been incorporated into EU law under the Amsterdam Treaty. Conservatives have complained about the EU Charter of Rights (not to be confused with the European Convention on Human Rights), although this has no effect on UK law, serving only to limit the laws of the EU itself. He also mentioned environmental policy but, as pollution does not recognise borders, this is a matter eminently suited for broader regulation. It is unlikely other EU states could tolerate a UK seeking to undercut them through lax environmental standards, reduced workers’ rights and a race to the bottom in social protection.

Disentangling the unwanted provisions from the EU treaties would be a nightmare; they are intertwined. The new arrangements would still be subject to the European Court of Justice, which might rule single market provisions required the UK to conform in other ways. With the UK half in, half out, we would have a continental West Lothian Question, since why would other members agree to UK ministers participating in decisions that did not affect them? Excluded from inner councils, they would be consigned to the margins when big decisions are taken.

Cameron proposes an in-out referendum. In fact, this means all the way out or half way out, since there is to be no status quo option. Again assuming he does negotiate a deal, nothing he could secure would ever satisfy his Europhobes or Ukip, so he will have to rely on Labour and Lib Dems to save him. If he should fail and be forced to support the “out” option, he will be in trouble with his business and City allies.

His speech changes the game in the Scottish independence debate. The SNP has been cautious on ­Europe, recognising the EU is not greatly loved in Scotland, but the Europhobia of the home counties has no counterpoint here. There has been a campaign to scare Scots with the threat of exclusion from the EU should they vote for independence. Now it seems independence is the only way to stay in the EU. It is the British Conservatives who now look like separatists and isolationists.