Minors’ rights to enter the UK: past policies, present politics?

This week I presented some of my work about the UK at a workshop about unaccompanied child refugees in Scotland, hosted by Edinburgh Napier University and sponsored by the Royal Society of Edinburgh. What does our work in dusty archives have to do with such pressing contemporary issues? The fact that I was invited shows a refreshing interest in the history of the UK’s treatment of immigrants: Evan Smith has wondered about a lack of historical memory in UK immigration policymaking generally, and specifically regarding age assessment, a major topic at this workshop.

There are some informative parallels between such child asylum seekers and children who came to the UK, sometimes unaccompanied on their journey, as dependants of Commonwealth citizens already resident in Britain in the 1960s. In both cases these children’s ability to enter the UK rested on the basis of rights – for child refugees, in international law, and for child Commonwealth dependents, in the Commonwealth Immigrants Act 1962. However, in both cases, it seems that a system meant to facilitate such rights easily became consumed by the idea that this right was being abused. By examining how this happened in the 1960s – and how alleged “evaders” became a prime target for the demonstration of control when it was judged too difficult for the base right to be curtailed – we can gain insight into how similar issues might be dealt with today.

Commonwealth minors and “evasion of control”

After World War Two, many New Commonwealth male breadwinners would settle in Britain first and send for their families later. The 1962 Act ended the absolute right of Commonwealth citizens to enter and settle in the UK, but provided that dependent family of Commonwealth citizens settled in the UK either before or after the act would keep this right, sometimes articulated as “a man’s rights to have his family with him.” This included spouses and children under 16; more distant relatives and 16- and 17-year-old children were often allowed in on discretion. No visas were required, though there was a voluntary entry certificate system.

Over time, officials became concerned that the act was failing at its goal of reducing non-white migration to Britain, even though the largest part of this flow – dependants – was hard to limit. Policymakers were still compelled by arguments that such limits would strip meaning from the Commonwealth, and that denying dependents’ entry would be an outrage on humanitarian and integrationist grounds. What to do?

Beyond further reducing primary migration, it is here that “evasion of the control” emerged as a concern. Numerically, “evaders” represented some kind of unnecessary addition to already too-great flows. Ministers seemed readier to believe that evasion was a primary aspect of immigration problems, where bureaucrats, at least early on, saw it as an issue secondary to the simple fact that the law allowed a lot of people to come in.

This is evident in these two excerpts, first from No. 10 Downing Street and then from the permanent secretary of the Home Office:

As family migrants became the major source of New Commonwealth immigration, “bogus dependants” became the major category of “evaders.” Policymakers suspected that some immigrants did not really have a qualifying relationship and that purported “child” immigrants were really 16 or even older. Related to this, officials worried that many older children were actually labour migrants in disguise. They were particularly suspicious of young men from the Indian subcontinent, whose identity documents they regarded as unreliable.

Monitoring the number of Commonwealth minors

In 1965, the government announced a reduction in concessions to family members whose rights were not guaranteed in the 1962 Act, including 16- and 17-year-olds and children joining relatives who were not parents. The rights-based discussion was not abandoned, however. On the grounds of both rights and efficacy, policymakers rejected both a mandatory registry of possible future dependant migrants, and mandating entry certificates for dependants.

But the situation grew more complicated as dependant migration still increased. Where officials were mostly sure at other periods that evasion was a secondary issue, by 1967 they seemed less clear. Incoming child dependants were subject to more fine-grained statistical attention, tracking ages and places of origin. Concern emerged in particular about Pakistani teenage boys coming to live in single-parent households with their fathers.

How did immigration officers try to spot “bogus dependants?” The methods were not sophisticated. Apart from detecting false documents, suspicions were often raised by a boy’s appearance. Wrist x-rays were taken in at least some ambiguous cases in the 1960s. The most significant method was separate interrogation: questioning the would-be child immigrant and the adult sponsor at the port, separately.

One can imagine the duress of child migrants in such situations, many of whom spoke little or no English. When International Social Service suggested allowing young men to enter and live with fathers only after a welfare check of their future home and with an entry certificate, the Home Office rejected the idea because they saw separate interrogation as the only reliable way to produce the “truth” about a migrant. 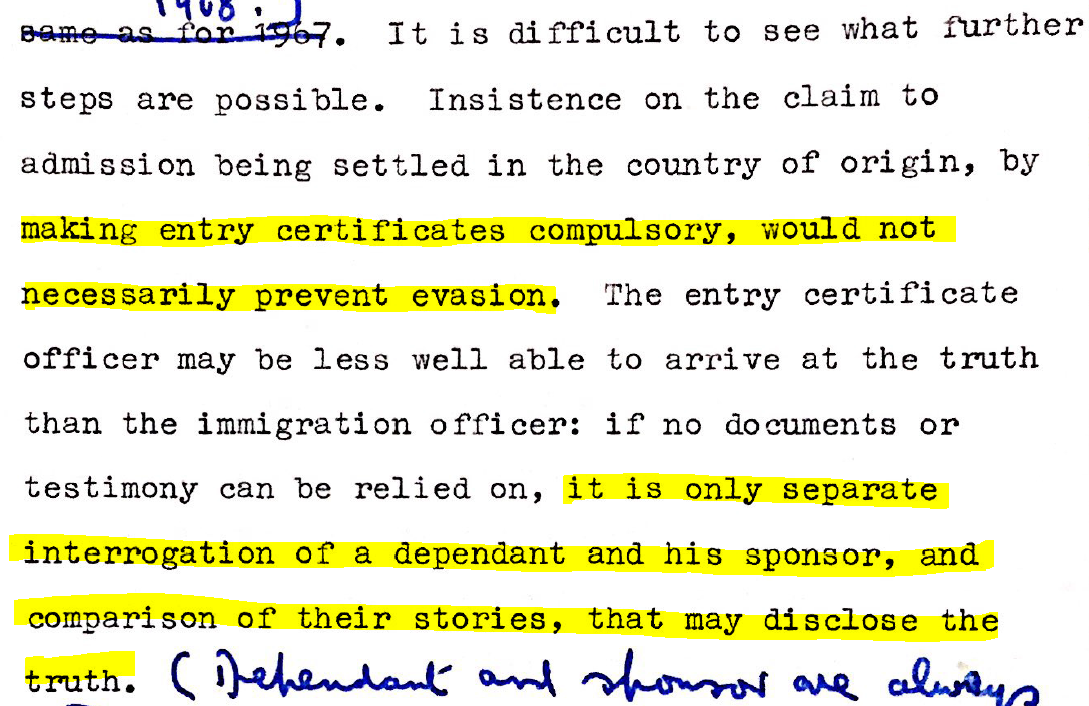 TNA HO 344/297, [Draft] Memorandum Submitted by the Home Office to the Select Committee on Race Relations and Immigration on “Evasion of the Commonwealth Immigration Control,” 29 Jan. 1969

Ultimately, child migrants joining a single parent were seen as such a welfare and monitoring “problem” that they were banned almost entirely in 1968. Still, the difficulties faced by Home Office officials at British ports of entry could not be ignored: young people who had journeyed thousands of miles risked being returned, and immigration officers in many cases had to make rapid high-stakes decisions to deny entry or admit someone permanently. It is for this reason that the Home Office finally decided to introduce a system of “entry certificates”.

The entry certificate requirement encountered significant bureaucratic opposition. It effectively required a type of visa for Commonwealth citizens that non-Commonwealth aliens did not need. It required rejecting people at the ports who lacked entry certificates, even if it was obvious they were in a category eligible to enter – a situation that before had been regarded as untenable, and that would require legislation. Since it did not reduce the amount of dependants with an entitlement to enter, policymakers also saw it as mostly beside the point of reducing numbers. It would put a hindrance on the exercise of rights, but to unclear ends.

However, with the opposition Conservatives arguing for mandatory entry certificates, there was political pressure to adopt the policy. The idea was brought back from the dead after increasing traffic in 1969 put growing pressure on immigration officers at Heathrow. Policymakers didn’t think of the move as effective at anything except smoother port management, but reasoned that it might look like action on the issue of immigrant numbers.

Looking back from the vantage point of the early 21st century, we can ask the same question as Home Office officials did in the 1960s: did the introduction of “entry certificates” really make a difference? There was certainly retrenchment at the margins of children’s rights to enter. But these rights were still mostly formally maintained, albeit with more suspicion and obstacles, and for a dwindling number of dependants, as primary labour migration was curtailed.

More broadly, we can ask whether this trajectory of mounting concern with child “evaders” was inevitable. Policymakers, then as now, believed that public confidence in the immigration system could be gained if “control” existed. But do intended shows of control actually achieve this, or reinforce the idea of shifty immigrants, mounting more anxiety? In either case, when there are strong political or legal justifications to be open to certain flows, this imperative seems to yield policies of dubious value, like the entry certificate requirement. Is there a way around these issues developing in such a way?

These questions remain very much alive today – and I was glad to discuss them with the workshop’s many impressive co-presenters and participants. Let us hope that their important work with unaccompanied child refugees helps to avoid some of the problems of the past.

PS. For those who are interested, there are two further workshops on 6 June and 23 June – follow the links to register.