In Malawi, cervical cancer is the most frequent cancer among women of reproductive and economically important age (45.4% of female cancers) and an 80% mortality. Numbers are projected to increase over the next 2 decades as improvements in other areas of health (eg treatment for HIV) increase length of life. There is no national programme for cervical cancer prevention through immunisation or screening and many women now survive childbirth only to die later of preventable cervical cancer. Inadequate access to treatment, ostracisation of women with severe symptoms of cervical cancer, and limited palliative care services are additional features.

We received funding from the Scottish Government International Development Fund for Malawi (2013-2016) to set up a sustainable programme of cervical cancer reduction in Nkhoma Hospital and 10 surrounding health centres. The project is jointly led by Professor Heather Cubie, Consultant Clinical Scientist in NHS Lothian until recently / Honorary Professor, Global Health Academy, University of Edinburgh and by Dr Christine Campbell, Senior Research Fellow, Centre for Population Health Sciences, University of Edinburgh. The principal clinicians are Sr. Hilary Brown and Dr Graeme Walker from NHS Lothian who participated in ALSO courses (Advanced Life-Saving in Obstetrics) in Malawi a few years back and others from round Scotland have helped / are helping for short periods through sabbatical or unpaid leave. 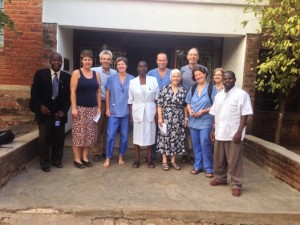 The Scottish and Nkhoma teams, October 2013

In the first two years of the project, our Malawian colleagues have provided information on the value of cervical screening to 4 Traditional Authorities and 84 Group Village Headmen and obtained their permission to speak to around 30,000 people in the region. In addition, a potential 120,000 (50% of the population) has been reached by local radio broadcasts. Twenty-four Malawian healthcare professionals (mainly midwives and clinical officers) have been trained to provide cervical screening using a procedure called VIA (visual inspection with acetic acid) and treatment of early lesions using cold coagulation. Case load is audited and competency of each provider is assessed by Scottish clinicians using similar standards to the UK.

Talk to women to explain what would happen in VIA clinic, Nkhoma Hospital 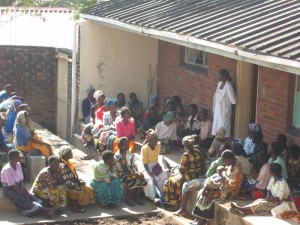 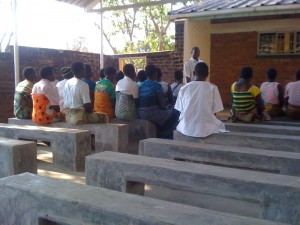 In the new outside classroom, October 2014

Over 7000 women have had their first-ever cervical screen. Those with early signs of abnormality have been offered treatment and 75% received it the same day. At the start of the project, a number of women said they would need to ask permission from their husbands to receive treatment but this is no longer a big issue. Hopefully this is because the information messages have reached the whole population, men and women, giving women a sense of empowerment. Two-thirds have returned for follow-up visits, despite this being considered difficult to achieve.

Sadly, the VIA clinics still see too many women with cancers which are too advanced for immediate treatment. There is little Malawi can offer in terms of chemo- or radiotherapy, but the project does ensure that these women have their diagnosis fully explained and are offered surgery or palliative care where appropriate.