As those of you who have come across this blog before will know, we are an interdisciplinary group of researchers engaged in an investigation of biological engineering, all the while probing the larger subject of engineering itself. It is exciting to be a part of such a project because engineering offers a vast and largely unexplored terrain for historians and philosophers of science (HPS), and those in science and technology studies (STS). Paying attention to engineers, their distinct professional identity, their practices and knowledge, is not only revealing in itself, but also allows us to rethink many of our favoured analytical or historiographical assumptions. Engineering Life has grasped this opportunity, but it is all the more exciting to situate the project within international trends, or rather (as this post does) attempt to identify such trends. For instance, only a couple of weeks ago a 3 day conference was held in New Jersey dedicated to ‘The Maintainers’. I was able to follow along on twitter, and recognised the research questions, methods, and conclusions that emerged as (in some cases) bearing directly on engineering itself, and in other cases, thanks to their focus on different kinds of labour, or overlooked forms of ‘innovation’, pursuing precisely the same kinds of interest. Just two weeks later came the ‘(Re)Engineering Biology’ workshop in Pittsburgh. Dr Pablo Schyfter and I attended this meeting, so my post is both a report on what was discussed/not discussed, but also the raising of a flag for those elsewhere, either already contributing to this emerging research community, or who are interested in the prospect. 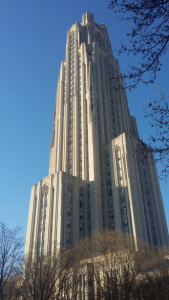 The Cathedral of Learning, Pittsburgh

As all of the papers given were quite exploratory, I won’t be referring to any in particular (you can read all of the abstracts here). Besides, finding languages that are common across the many different disciplines represented would also be pretty difficult. With regard to the ‘philosophy & engineering’ question though, it was hard to draw out common agreement from the papers, largely thanks to that old devil biology. The workshop was dedicated to biology’s purported new ‘engineering paradigm’:

This workshop aims at characterizing the new engineering paradigm in biology, especially how engineering practices and epistemological perspectives differ with respect to established biological modes of practice and accepted biological epistemology, and at examining the transformative aspects of the concepts, techniques, strategies, and epistemic principles that engineers bring to biological phenomena and how these conflict, contrast, or accord with traditional biological approaches.

However, many of those who had investigated biology on these terms, had come to find that it actually had little to do with engineering and much more to do with longer legacies of research in the biosciences. That’s fair enough, and these are important conclusions in their own right, but it did also mean that the engineering component (and its significance for wider HPS/STS) got dropped. Another couple of papers focussed instead on how ‘engineering-like’ ideas or terms, can be applied to the philosophy of biology, or used to understand social change (in some cases the connection was made by analogy, in others it seemed far more direct). This was not an angle that I had anticipated, and again, it meant that the question of understanding engineering knowledge itself got set aside. One presenter did indeed take on the latter, but their answer (at least through my warped spectacles, which by that time were also pretty knackered and caffeine stained) seemed to require use of a distinction between ‘knowledge’ and ‘technology’. Historically speaking, this division has not worked in favour of those looking to investigate the technical and practical life of knowledge production, so its preservation makes for an interesting choice (again, provided I understood the argument).

Aside from biology, there were other factors at play which made it difficult to bring our collective attention to the significance of enginering in HPS and STS. For instance, I got the sense that for the purposes of the workshop, ‘engineering’ had been made synonymous with ‘practice’, or perhaps to put it another way, that the strides which have taken place thanks to the philosophy of science in practice have been, as it were, contributing to the engineering agenda all along. This is true for some of it, but not all. Speaking as a fan of the philosophy of science in practice, I agree that much of their work can be picked up and applied readily to cases that aim to understand engineering (as I did in my own paper through Ankeny et al. on situated modelling). However, the decision to extend these arguments to include engineering contexts deserves comment, and invites the opportunity to compare and contrast science and engineering (even if we ultimately conclude there are limited or zero grounds for demarcation).

Ultimately, it’s impossible to anticipate what different people see when they all look at the phrase ‘engineering biology’, and perhaps all that the previous paragraphs record are my own ambitions, which may or may not have been shared by everyone else (or perhaps are dumb for reasons which I look forward to learning). My perspective is also of course a result of my current research project. The way I have come to understand our mission (which doesn’t speak for everyone else on the project!) is that: A) you might want to say of most anything that is has been ‘engineered’; but B) only sometimes have the people involved been ‘engineers’. A) requires an investigation of that wide range of practices and ways of working that typically get reduced to ‘the engineering approach’, while B) asks us to find out what working and knowing as an engineer has actually entailed.

Right, what were the common themes?

Many of the papers described either how working with analogies, or building analogies between different things, seemed to constitute an important part of that thing called engineering. Mary Hesse’s work was mentioned, which certainly could work as a common meeting ground in the future. I particularly like a focus on analogical reasoning because it can also allow us to think about those analogies in our own work, in particular between the structure of our arguments about engineering and engineering itself. You could call this the ‘How owners start to look like their dogs’ problem. Indeed, as I explained above, some of the work presented was aimed at drawing direct analogies between cultural change and biological development, in ways that I was not the least bit prepared for. The extent to which ‘emergence’ captures the phenomena at play in synbio is also worth thinking through in this regard – is it something ‘like’ emergence that synthetic biologists are dealing with, or that very concept?

Though often discussed in partnership with analogies, the practices of modelling were also themselves a point that many congregated around. Again though, whether engineering models contribute something different to our extant work on modelling in the philosophy of science did not get much attention.

Some focussed on the role of synthesis in contemporary biology, and its rhetorical or experimental significances. An important point that emerged during discussion was that synthesis, as a method or a way of organising one’s research programme, has a far longer history than some of those practicing in contemporary biology might have you believe (it was suggested that we look to the history of biochemistry). As an historian, this pointed directly to how different factions in the contemporary biosciences are mobilising the ‘novelty’, or in some instances the ‘long history’, of their work, depending on the audiences that they are communicating with.

There are a great many ways in which to pursue a research agenda according to something like ‘trial and error’, a term which was used in a number of papers. What would be really handy would be a catalogue of cases exemplifying different ways of working in a ‘trial and error’ mode. Such a catalogue would be a great help for future historians/philosophers/sociologists, providing richer analyses of much of the research that takes place in engineering, for which ‘trial and error’ might otherwise be an oversimplification. Exploratory experimentation might be a handy place to start looking for the right descriptive language.