What about the frogs?: Reflections on ‘Community and Identity in the Techno-Sciences’ workshop

Our post this month comes from Chris Mellingwood, a PhD student affiliated with and contributing to the Engineering Life project. You can contact Chris on c.r.mellingwood [at] sms.ed.ac.uk. 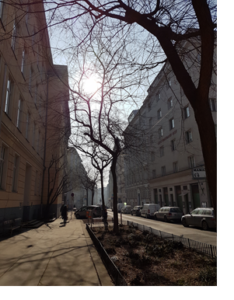 The sight of un-melted dirty snow on an urban street may not seem that interesting.  More importantly, “what the hell has this to do with frogs?!” I hear you say. Well, I want to suggest that frogs and snow are much alike, with an important difference that I’ll come to later. The reason frogs come in at all is thanks to a paper included in a STS workshop hosted in Austria on ‘Communities and Identities in Contemporary Techno-Sciences’. The title of my paper was ‘Experimental automation: Amphibious practices in UK bioscience’, and amphibious practices are one way that I have conceptualised observations made over a number of years in UK academic biosciences labs, more specifically, labs trying to fully automate parts of their experimental systems. Although I have observed strikingly different contexts for laboratory automation in UK academia, one similarity across all sites has been the presence of researchers who are comfortable within both ‘wet’ biological labs and ‘dry’ computer science labs – they are amphibians. Frogs.

So, walking down this sunny Vienna street on my way to the workshop I noticed the soot-covered snow drift, one which was noticeable thanks to its being out of place, and thought about my frogs, about how they fit with their place, and about how both snow and amphibians each have a duality. Snow is both solid and liquid, a frog requires both wet and dry habitat to survive. The word amphibian derives from the Latin-Greek ‘amphibios’ which translates literally as ‘living a double life’.  The double life of snow, you could say is constant transition from solid to liquid, from ice to water and eventually as hydrogen and oxygen evaporating in to the atmosphere. And here’s the important difference between frogs and snow, a frog must maintain the duality of wet and dry, amphibians are simultaneously land and water species, they do not switch or transform at the point of leaving or entering one domain or another. Frogs do not have the same transience as the patch of snow I snapped on my way to the workshop.

The conference, however, was stock-full of perspectives on the transient, fragile and unstable dimensions of both community and identity. For example, in contemporary sciences fixed-term contracts and finite funding cycles result in constant movement of people between projects and locations; community in this sense is always in flux. Similarly, and related to such multiple belongings across different communities, identity was conceptualised as being continually re-enacted. A number of presentations highlighted the identity-work that goes on as individuals identify- with one group or another. A clear example of this kind of identity-work, from my own PhD research, is the way that the label of ‘synthetic biologist’ is taken on, ignored, or outright rejected by laboratory users who seem to be using very similar tools in the laboratory, but have differing aims, expectations and affiliations.

The key point for me here is the tension between constant transition and the need to hold any research object still to undertake meaningful analysis. The labels attached to particular disciplines, be that systems biology, synthetic biology, or biodesign are but one example of these perpetual transitions. Seen cynically, as a number of workshop participants noted, affiliations with one label or another can come down to strategic decision-making about how best to secure the next round of funding. This may be the case for prospective PIs during grant writing processes but, for the postdocs in my cases at least, there was something more fundamental about why they took on certain identities or threw their hat in with certain groups.

For this small but important group of frogs across my research sites, disciplinary labelling did not seem to feature in their self-conceptualisations; they often articulated multiple belongings – as, say, both computer science programmers and ‘green fingered’ wet lab biologists – but these identities were intertwined with individual autobiographical narratives that reflected the multiple, and sometimes contradictory trajectories that bring people in to careers. In the same way I am holding the snow in a fixed-state in my picture however, informants in my cases also had to hold their own lives still to recount and explain how they seemed to have found belonging across the multiple worlds of ‘wet’ and ‘dry’ lab science.

This brings us back to an important theme coming out of the conference for me, tensions between stability and dissolution. What can be seen, for example, when this shrinking pile of snow catches the eye of a passer-by? Is it a tangible sign that winter is now giving way to spring? Or will a Viennese local be transported back those few short days to a city blanketed in glistening white? As for me, an outsider in several ways the left-over snow was anachronistic, out of time and place, entirely dissonant from the previous hour’s experience, taking in Vienna’s stunning architecture under crystal blue skies. In short, the snow pile represents a multitude of possible pasts, always to some degree unknown because what people see and feel when standing on this corner, looking at this pile of soot and ice depends largely on their connection to this place at this particular time.

From unknowable pasts to seemingly predictable futures then. Do we ‘know’ that the ice will soon turn to water, solid to liquid, evaporating in to the atmosphere and finally leaving no trace of the rapid changes in season that have been and gone? Perhaps, but the traces of those changes will be left behind in each individual’s experience, some fleeting – like my own – others inherently stickier as those experiences are reflected back by others also sharing that time and place. This, it seems, is the power of community, to act as a repository of collective experience making, firmly connected to a shared space (physical or virtual), and often anchored to a particular period of time. Now that I have described them to you, will the amphibious researcher become all the more visible? Or will certain sets of skills always be appreciated at their parts rather than their whole? 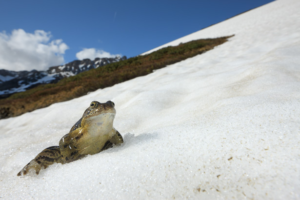