Trusting in Expertise? Knowledge, Advice and Policy in the Environmental Domain 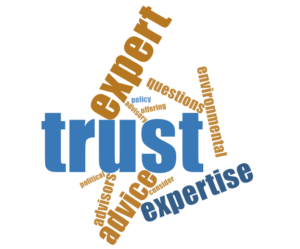 At a time when trust in expertise is widely believed to be in decline, this lecture addressed three interrelated sets of questions, with particular reference to the role of expert advisors in the policy processes of modern democracies, and with some emphasis on the environmental domain.

I consider, first, how we think about expertise and its roles—how have expert advisors and their interactions with policy- and decision-making been conceptualised (in academic literatures and in public and political discourse)? I then turn to the important questions of trust in, and the trustworthiness of, expert advisors, asking why it is thought that such trust has become fragile and examining various sources of evidence for this claim. Finally, I attempt to draw out some of the attributes and practices that engender trust in expertise, and consider how and to what extent these might be nurtured and maintained in modern advisory institutions.

In addressing the question of how expertise is conceptualised, I shall begin by offering two contrasting but equally familiar representations—that of expert advisors as ‘rational analysts’, furnishing evidence and ‘the facts’ for the benefit of those who formulate policies; and that of experts as ‘political symbols’, in which advice is used selectively and strategically in the interplay of interests, institutions and power. Certainly, in the environmental field, we can identify elements of both of these models, but neither provides an adequate account of actual advisory practices. I shall argue that richer understandings are offered by conceptions of expert advisors as cognitive and discursive agents, and by attending to the roles that they play (particularly in the context of scientific advice) in ‘boundary work’ and co-production. I shall ask, in addition, whether we are now faced with another way of thinking about experts—that they are really not much use at all.

This will bring me to the question of trust in expertise, on which I shall briefly consider evidence from a range of sources that might tell us something about trust or mistrust. While people’s routine behaviours, regular opinion polls, and the manifest enthusiasm for science-based documentaries might suggest (with caveats) that reports of loss of trust have been exaggerated, there are also countervailing developments. One subject of increasing concern is the ease with which all kinds of information, some of it wilfully manipulated, are available via digital media, combined with the apparent readiness with which unverified claims or ‘fake truths’ are accepted in place of ‘traditional’ expertise. Loss of trust has also been inferred from uneasiness about, or active resistance to, certain techno-scientific developments; I shall argue, however, that any general inference about trust based on these phenomena would be unsafe. Before concluding this section, I shall also comment on reasons why it may be appropriate not to place (unquestioning) trust in experts.

In the final part of the lecture, where I shall seek to identify some of the conditions for trust in expert advice, I shall draw upon my own extended analysis of one of Britain’s longest-standing advisory bodies, the former Royal Commission on Environmental Pollution (of which I was also a member for 10 years). The Commission presents a very interesting case study, not only because it was influential, but also because (for the most part) it was seen as offering trustworthy advice over the four decades or so of its existence. I shall consider which attributes and practices were important in generating trust and influence—and further, in raising broader questions about institutional arrangements, identify some tensions between the characteristics that made the Commission effective and the practices that are increasingly urged on advisory bodies in the interests of ‘accountability’. Finally, I offer some thoughts on the political context for trust in, and trustworthy, advice, returning to the example of environmental controversies and arguing that, in such cases, the most effective advice has often involved the purposeful and constructive hybridisation of science and politics.

Susan Owens is Emeritus Professor of Environment and Policy at the University of Cambridge, and a Fellow of the British Academy. She has researched and published widely in the field of environmental governance, focusing on policy processes in modern democracies, relations between science and politics, and the role of knowledge, evidence, ideas and expertise in policy formation and change. Her most recent book, Knowledge, Policy, and Expertise (Oxford University Press 2015) provides an in-depth analysis of the practices and influence of one of Britain’s longest-standing environmental advisory bodies (the Royal Commission on Environmental Pollution [RCEP], 1970–2011), as well as addressing wider questions about knowledge–policy interactions. She also has extensive experience of serving on advisory bodies: she was a member of the RCEP for ten years, currently serves on Defra’s Social Science Expert Group and Hazardous Substances Advisory Committee, and chairs the Science Advisory Council of the Stockholm Environment Institute.