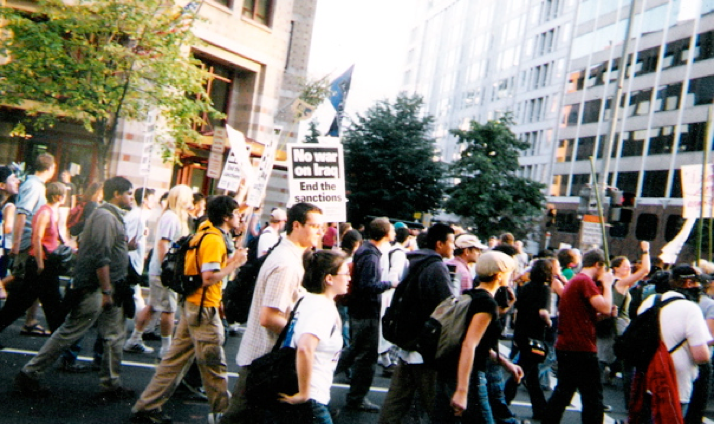 How should we respond to injustice abroad? On the international level, it is difficult to hold actors accountable who are responsible for harmful actions. If a state persecutes minorities within its borders, or is on the brink of developing nuclear weapons, how can others motivate it to change its behaviour?

Much is at stake, because our responses can have dramatic effects on innocent human beings. One option is intervention, going to war to force change. But costs to innocent persons are high, on all sides. Another option is to sit back and do nothing. However, this allows the state to continue harming people within its borders, or develop weapons that could potentially harm many others in the future. Are there any other routes that states can pursue to effectively deal with those violating international norms, while causing as little harm to innocent persons as possible?

In his forthcoming book The Alternatives to War: From Sanctions to Nonviolence, Professor James Pattison explores the options located between the extremes of declaring war and doing nothing. He assesses the ethical dilemmas these alternatives generate: Are they morally permissible? Are they effective? Do they comply with values important to us? One alternative under evaluation are economic sanctions, by which states impose economic restrictions on another state in order to coerce it to comply with their demands. Such sanctions can be comprehensive, cutting off an entire economy, or they can be targeted towards single economic sectors, or individuals. The desired result of these measures is that imposing economic pressure will force a state to change its policies or behaviour.

The ethical dilemma is that ‘economic pressure’ essentially means causing harm to ordinary civilians who have to suffer the consequences of disruptions to the economy, facing job losses, increased costs of living, and shortages of resources. For instance, broad financial and trade sanctions – as imposed by the United Nations Security Council on Iraq in the 1990s – may subject the local population to severe shortages of essential goods such as food or medicines, leading to malnutrition, the spread of diseases, and, ultimately, people dying. Meanwhile, the desired outcome is by no means guaranteed, as the government under sanction might not change its behaviour. For these reasons, economic sanctions are widely regarded as morally impermissible. They cause too much harm without ensuring the intended result.

Second, since it is widely known that economic sanctions are likely to cause harm to innocents, critics argue that states who nonetheless impose sanctions act wrongly, because they intend this harm. In reply, Pattison draws a distinction between motives and intentions. Motives are the ultimate goals of our actions, while intentions are their immediate goals. Although it might be true that the suffering of innocents in the target state is intended, this is not necessarily impermissible if the ultimate goal of those imposing sanctions is to reduce harms overall.

Third, economic sanctions are criticised for reducing people to a mere means to an end, denying their inherent moral worth. Pattison rejects this characterisation, arguing that states can value the dignity of humans whilst reluctantly accepting some harm to them, for the greater good. Nonetheless, he indicates a limit to how much harm is justified in the pursuit of ultimate goals.

To put a limit on how much harm is permissible, Pattison urges us to reassess how we evaluate the effectiveness of economic sanctions. Instead of assessing their success with regards to the goals of international community, we should focus on the overall effects on human rights and well-being. For instance, when international community imposes broad economic sanctions on a state to coerce a change in its political leadership, we should not just assess the sanctions’ effectiveness based on the achievement of this goal. If broad sanctions cause severe harms to large parts of the population, they cannot be regarded effective, regardless of their political result. On the other hand, if targeted sanctions only affect liable individuals without harming innocent civilians, they are permissible. We can also contrast this with other options: do human rights suffer more when we declare war, or impose economic sanctions?

When a state violates human rights, it is likely that all possible responses will involve harms. Therefore, so Pattison argues, we need to evaluate which action will result in the fairest distribution of harms among persons. In war, soldiers have to bear the brunt of the costs, while inaction could put concentrated costs on a persecuted minority. Economic sanctions, despite affecting more people, can potentially distribute the costs more evenly among the population. Overall, Pattison endeavours to establish that economic sanctions are not morally wrong per se. He calls for a pragmatic and nuanced approach to evaluating the methods and outcomes of sanctions in comparison to the potential harms and benefits of other approaches.

Harming others for a good cause?

When discussing this chapter with Pattison in our Contemporary Political Theory class, the debate circled mainly around his distinction between intentions and motives. Concerns were raised that a focus on good motives might justify terrible behaviour. How much harm are states allowed to cause in the name of a good motive? Pattison replied that constraints of proportionality would apply, but the boundaries were left unclear. He maintained that the reasons for actions matter in our assessment of their morality. If a state imposes sanctions because it dislikes the inhabitants of another state, its motive is bad. If it imposes sanctions to ultimately secure human rights, its motive is good. Further questions on the importance of consequences followed. If a person saves another person’s life to earn a reward, their motive is wrong, but we couldn’t convincingly defend the notion that the action was wrong. Also, how can we know the true motives of a person, let alone a state?

In the end, the discussion was left unresolved. Despite general agreement that the consequences of actions do matter, there was less agreement on how we can tie motives into our moral assessment for actions, without allowing for too much harm. Yet the debate highlighted the inherently problematic nature of economic sanctions that invariably cause harm to some individuals. Is some harm justified if it serves a greater goal? How much harm is justified? Pattison suggests that, when we are caught between a rock and a hard place, having to decide between different options involving harms, we should weigh them against each other, to see which is the lesser evil.