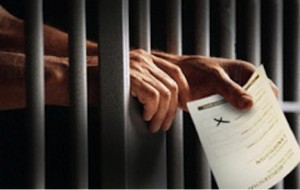 I was prompted to this reflection following a recent group visit to HMP Shotts, at the invitation of prison governor Jim Kerr, to learn about the nature and conditions of prisoners’ work there. (It was an enlightening experience, as Liz Cooper has described in her blog).  The topic of voting didn’t come up, but more substantial issues about prisoners’ relations to the wider society did. END_OF_DOCUMENT_TOKEN_TO_BE_REPLACED