The Birth of a State has Many Midwives 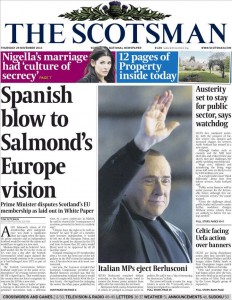 The international community weighs in…

Ryan Beasley and Juliet Kaarbo analyse the role that the international community can and should play in Scotland’s referendum debate.

In early 2013, the BBC surveyed EU governments, asking for their opinion on Scottish independence and on the question of Scottish EU membership. More than half of the member states responded either that it was entirely an internal matter or refused to reply.  Why the silence?  Are other countries just not interested in the outcome?  Almost certainly not.  More likely, other governments feel constrained by international norms of non-interference.  Simply put, outside actors are not supposed to intervene in free and fair democratic processes.

A democratic referendum means an honest opportunity for the ‘rule of the people’ and a chance for the ‘yes’ and the ‘no’ sides to campaign and shape public opinion.  It also means giving a platform for outside actors to shape the public discourse and to define what Scotland might, and might not, be should it gain independence.

This can be considered an international norm, which is the  unwritten rule about appropriate behaviour that can shape and constrain states’ actions.  Indeed, international norms about democracy are strong.   Given the widespread sense that people should be free to govern themselves, and the idea that democratic governments tend to conduct both their internal and external affairs with less brutality, it is rather difficult to justify interfering in what is arguably the most significant of democratic exercises, a vote on independence.

But that is exactly what is going to happen, and actually has been for some time, albeit indirectly.  This is not unique to the question of Scottish independence, but has to do with the nature of statehood itself.  When new states are born, or seek independence, the international community has a vested interest in the outcome.  External actors attempt to shape both whether a new state will emerge and what role the state would play in the world, even before statehood.

Members of the international community have a variety of reasons for being keenly interested in the outcome.  While the United States, for example, will undoubtedly continue to profess neutrality born of respect for the right of peoples to rule themselves, it will also put its thumb on the scale in an effort to create an outcome suitable to its preferences.  And make no mistake, it has preferences.  Not only is the United States concerned about the future of the Trident submarine, but an independent Scotland potentially weakens one of its strongest allies (the UK) and independence may set a precedent for further, possibly dangerous, separatism in other parts of the world.  These concerns have been voiced in U.S.-based elite opinion pages and by former Secretary of State Madeleine Albright, with SNP reactions.  Norms against outside interference in democratic processes prevent blatant interference, so influence takes other forms.   States can emphasize, for example, Scotland’s small size and the challenges of security and economic viability that small states face.   States can choose or refuse to meet with Salmond in the run-up to the referendum.

It’s not just state that are seeking to limit (or grow) the  sovereignty club. Organisations with rules for both admission and conduct have a stake – and hence a say – in the possibility of new statehood.  The EU, NATO, the UN and the WTO are the most obvious. Already international organisations have weighed in on the debate, if through no other means than suggesting the ease or difficulty that Scotland might face in trying to gain (or regain) membership. The EU Commission President declared that any new state would have to apply for EU membership, despite the SNP having said an independent Scotland would be able to renegotiate its terms of membership from inside the EU.  NATO also indicated that an independent Scotland would have to apply as a new state and that membership would require unanimous agreement of all twenty-eight states in the alliance. Deciding to apply the organizational rules in this fashion can be seen as an effort to shape the debate itself, and the role Scotland might (or might not) play in the event of its independence.

Of interest is that the very thing that makes this event unique is also what gives rise to these types of efforts to influence the outcome. Scores of states have been created over the last 60 years, and many of them were also seeking to join the EU and be a part of the NATO alliance.  But this is an independence movement in the European heartland of democracy and political stability, while most recent new states have come from the process of decolonization or the break-up of empires or larger states – the Soviet Union and Yugoslavia are prime examples.  And unlike most other new states, Scotland is deciding on independence through a very open political and democratic process.  This openness, however, cuts two ways.  A democratic referendum means an honest opportunity for the ‘rule of the people’ and a chance for the ‘yes’ and the ‘no’ sides to campaign and shape public opinion.  It also means giving a platform for outside actors to shape the public discourse and to define what Scotland might, and might not, be should it gain independence.  And so in September 2014, the people in Scotland will vote their fate.  But in the larger landscape, because the creation of a new state hangs in the balance, others states and organisations of the world are already part of this debate.  Far from being silent, important actors on the world stage are voicing their concerns by attempting to shape the role that an independent Scotland could play.  In this sense, democratic norms empower citizens to determine their sovereignty, but not necessarily their destiny.